Welcome to the round-up of reviews and news of all things wrestling in and around Nottinghamshire.  British wrestling is enjoying a huge resurgence in popularity currently with all the local promotions reporting sold out houses on a regular basis.  You don’t need to wait for the big boys to come to town to get your fix grapple fans, it’s happening right here on your doorstep. 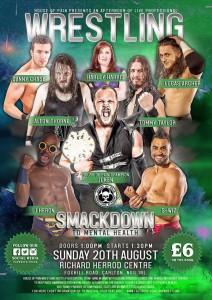 House of Pain Wrestling, who are based in Nottingham had a busy July after starting their month with a Debut Day for new and emerging talent.  They round the month off with a series of six dates that include Hucknall, Rainworth, Cotgrave, St Anns and include a family fun day event on July 29th in Derby at the Bramblebrook Community Centre held in conjunction with Aspire Wrestling.  HOP always have a packed schedule, you can check out their Facebook page for full details but reserve your tickets early.  Next month this promotion is involved with the Smackdown to Mental Health event in conjunction with Gedling Borough Council and Arnold Methodist Church.  The show will be held on August 20th at the Richard Herrod Centre, Carlton and is to raise awareness of mental health issues as well as funds for a 24 hour crisis centre run by the Methodist Church. 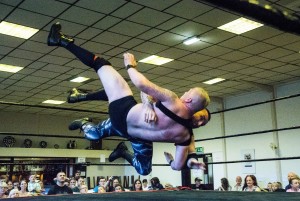 August is a busy month for Notts wrestling fans as Hope Wrestling return to the Forest Town Arena in Mansfield for their 4th Anniversary show which will feature international stars Travis Banks, Bram and Angelina Love as well as a host of UK talent, check out hopewrestling.co.uk for all the info.  The following day, August 5th, Southside Wrestling makes a return to the Rushcliffe Arena with not one but two packed shows, Menace 2 Society 7 and Day of Reckoning 18.  Over the course of the day fans will see matches featuring the likes of Davey Richards, DJ Z, Joseph Conners, Kay Lee Ray, Bubblegum and the eleven time WWE Tag Team Champ, Intercontinental Champ and winner of the 1999 King of the Ring, Mister A-Double Crooked Letter himself, Billy Gunn who will be facing off against the leader of the Malen Militia, Paul Malen. 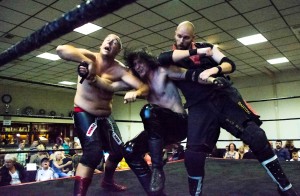 On Friday 21st July at Hucknall Working Mens Club House of Pain made its monthly visit to this venue bring a packed card of non-stop action to an appreciative crowd.  Matches included singles and tag team action and in addition to the scheduled double main event, fans were treated to an impromptu HOP Heavyweight Championship match too.

First up, Bully Boy Carter returned to HOP to take on Nice Guy Eddy Martins, this was Martins debut for HOP at this venue but he was immediately very popular with the audience and after a hard fought battle came out victorious. 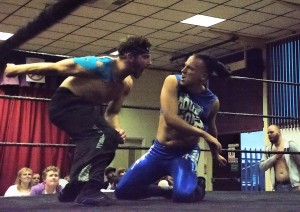 Next the Martial Law tag team of Mean Marcus Hood and Bam Bam Barton took on Heavy Metal Jack Kastor and Syntax.  The match got underway once Hood had revealed his “muscular physique” to the crowd, he’s not got a Jelly Belly, with Hood facing off against the masked wrestler Syntax.  After some magnificent action Martial Law took the win but only after resorting to dirty tactics and a low blow behind the referee’s back. 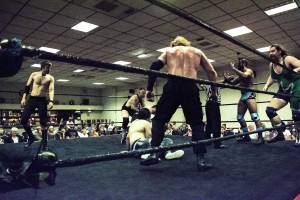 What was to have been a non-title match followed but after much goading from Joseph Starr, Juken gave in to public demand and put the belt on the line.   Starr put on a valiant attempt in his quest for gold but after the Road Warrior Juken inadvertently knocked the referee out, not once but twice in the match, the Champ managed to retain his belt with a modified suplex for the three count.

HOP’s resident police office The Interceptor Sergeant Rothrock was up next in a match against Steven Harris, before the action began Steven Harris informed the crowd that he should not, under any circumstances, be referred to as “Stinky Steve”.  Rothrock did his bit to help this situation by spraying Harris with deodorant to save the fans any unpleasantness.  Rothrock took the win after a host of high flying moves and his supporters were overjoyed when he forced Harris to tap out. 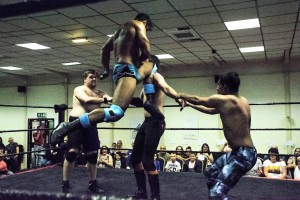 A match for the House of Pain Full Throttle Championship was up next with Visage, the Supermodel of the World, in action against the current champ H-Block.  Despite the chants of “Scrappy Doo” which only served to annoy H-Block, and delight the fans, the match got underway and was full of high octane action both in the ring and on the floor too.  Unfortunately for Visage, H-Block’s associate Nate Colt got involved and got his crony disqualified which meant that H-Block’s run as champion continues as the belt does not change hands after a DQ.  H-Block & Colt then attacked a defenceless Visage after the bell had rung but Nice Guy Eddie Martins ran in to make the save.

The final match was an 8 man tag team bout with the team of The Malen Militia lead by Malicious Paul Malen against Team Wyld which was made up of Big Mike Wyld, Garrett G-Wiz Bond, Sensational Saj Malik and Big Freakin Dan.  The match descended into chaos from the opening bell with all eight men going at it all over the area, outside and in the locker room too.  After order had been resumed by the referee for the second time, Team Wyld came out victorious much to the delight of the fans.

Check out the House of Pain Facebook page for all the up to date news on venues and matches and how you can learn to become a professional wrestler too.