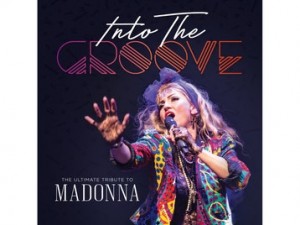 Elly Jarmain has one of the best jobs in the world…after Madonna.  Because Elly from Derby gets to dress up and pretend to be Madonna every night.
Friday night at The Royal Concert Hall in Nottingham saw the first performance of the new production, ‘Into the Groove’, a celebration of the incredible 35-year career of the best-selling female artist of all time.
The dazzling production which features all of Madonna’s greatest hits such as Holiday, Like a Prayer, Papa Don’t Preach, Material Girl, Vogue, Music, Hung Up was well received by the audience who, it has to said, were a mixed bunch.  Predominantly female, it felt like being at a hen party crossed with a do at the local community centre.  I’m not saying that’s a bad thing necessarily, it was just odd.
The audience were up on their feet from the start – some dancing, some just stood in little groups chattering away like they were down the local, a lot of them drunk.  I’m no party-pooper, I just think they should have some respect for the artist performing, as Elly and co worked their socks off to recreate highlights from Madonna’s breathtaking live tours.
Most feedback seems to have been positive, it was a cracking night out and Elly is no amateur.  She’s  been emulating the Queen of pop for years in various shows and this attention to detail both vocally and visually does not go unnoticed by this reviewer and Madonna fan.
Many years ago as a young girl I saw an image of this bleach blonde woman on the cover of Smash Hits.  I’d barely heard her music, but knew on site that there was something different about her. I felt guilty as I took down a Wham poster to make way for this unique looking pop star, but it was the start of a life long admiration of the Material Girl.
I grew up listening to her music.  The Girlie Show Concert was pretty much my first introduction to soft porn! OK, so I think she’d peaked by the ‘Music’ album, but the fact she continues to produce music and reinvent herself is admirable in an industry which loves to knock you down.
What I’m trying to say is that whilst I wouldn’t say I’m a super fan, I’m well aware of Madonna’s many guises and concerts. The outfits, the dance routines. Putting on the show that pleases everyone is an incredible challenge. Where do you start with so much material? what do you put in and leave out?  How should she look?
In terms of choices, I think they got it pretty much spot on (Ok, True Blue should have been included) and the reinventions were faultless.
Not only does Elly manage to make herself look like Madonna with clever use of make up and wigs, but most importantly, she does sound like her.
I did some Madonna covers during my own time performing in clubland, so I can tell you first hand, some are not so easy.  The high notes on Crazy For You demand incredible control and likewise Express Yourself can end up screechy.  Thankfully, she had it covered.
As great as the show was I still felt like there was a little something missing, or some things.  I guess a tribute doesn’t have the budget of the real Madonna but the problem you have is that Madonna does everything on a big scale. So while this production had two dancers, a live Madonna show would normally have her two backing singers plus a whole group of male and female dancers as well as the live band.
Our tribute has a band of three playing along to, what I think are still called ‘click tracks’, like a backing track that keeps everything in time and has backing vocals recorded on it.  I was trying to work out if Madonna’s (Elly’s) voice was layered, a trick the real Madonna used, particularly in the studio, whereby you record the vocal then record another vocal on top of it and then another, so it thickens the finished vocal as there are many rather than one (make sense?), so no bad thing if it was, I was just curious as to whether that was how they got it so similar. The other thing it was missing was the raunchiness.  It felt very tame compared to a real Madonna concert, but maybe it had been toned down to allow children in the audience.
The props were great and clever use was made of a screen behind the artists which had projected on it various things including a church, an American flag, clouds, all working with the song. The lighting effects maybe could have been a bit flashier, but I’m being super critical now.
It was great though to see fans old and young together enjoying the music, digging out their lacy gloves, conical bras and cowboy hats.
My shoes were stuck to the floor by spilt alcohol and I got hit round the head four times by the tipsy woman dancing behind me, but I loved every minute of it!
For more information visit: https://www.intothegrooveband.com/
By Tanya Louise
Editor
Visit My Blog
Visit My YouTube Channel
Listen to my Podcast
Find Me On:
Twitter Instagram and Facebook
Disclaimer: My tickets were gifted but my views and cleaning bill are my own.