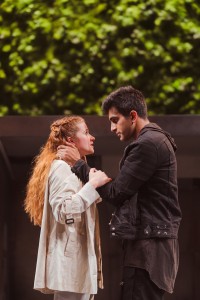 “After its Stratford and London runs, this production is heading out on an extensive countrywide tour and it will, I strongly suspect, prove a big national hit.”
Evening Standard, ★★★★

The Royal Shakespeare Company will tour its critically acclaimed production of Romeo and Juliet to the Theatre Royal Nottingham from Tuesday 19 to Saturday 23 February 2019.

Eight young people from Bluecoat Beechdale Academy in Bilborough will join the professional cast in this production.  Bluecoat Beechdale Academy is part of the RSC’s Associate Schools programme, a partnership between the RSC and regional theatres, including the Theatre Royal Nottingham. In two teams of four, the young people, aged between 14-15, will share the role of the Chorus with the RSC professional cast, with each team taking part in 3 or 4 performances.

Directed by RSC Deputy Artistic Director, Erica Whyman, the production features Bally Gill and Karen Fishwick in the roles of Romeo and Juliet.

Erica Whyman said: “Touring our work is at the heart of what the RSC is about.  It gives as many people as possible the chance to experience our productions.  The RSC’s award-winning Matilda The Musical is currently on a UK and Ireland tour, and later this year we will take our First Encounters with Shakespeare production of The Comedy of Errors into theatres and schools.

“In 2016 we toured my production of A Midsummer Night’s Dream around the UK, which involved local amateur groups and school children working alongside our professional cast.  I know from first-hand experience the effect this had on those who took part and those who saw the show.  It’s therefore a great delight to me to be taking another of my productions, this time Romeo and Juliet, out on the road in 2019.”

Bally Gill’s previous credits for the RSC include Coriolanus, Salome, Vice Versa, Always Orange and Fall of the Kingdom.  His other credits include The Island Nation (Arcola Theatre), A Local Boy (The Arts Theatre), Dinner with Saddam (Menier Chocolate Factory), The Bureau of Lost Things (Theatre 503) and NW (BBC/Mammoth Screen).

Karen Fishwick makes her RSC debut. She most recently appeared in Our Ladies of Perpetual Succour (National Theatre of Scotland/Live Theatre). Her other credits include Glasgow Girls (NTS/Citizens), Hansel and Gretel (Citizens Theatre), The Caucasian Chalk Circle, A Christmas Carol (Royal Lyceum, Edinburgh), Badults (BBC Three), James Kirk’s Comedy Blaps, The Illuminati (The Comedy Unit) and Tides and Telegrams (for The Winter Tradition).

Charlotte Josephine, known for her writing as well as acting, plays Mercutio.  Charlotte’s hit plays include the award-winning Bitch Boxer and the Edinburgh Festival Fringe sell-out Blush. Her acting credits beyond her own work include being part of the Lyric Hammersmith’s Secret Theatre Company and Phyllida Lloyd’s Julius Caesar at the Donmar Warehouse.

Ishia Bennison plays the Nurse. Ishia’s previous RSC work includes: A Mad World My Masters, Candide, A New Way To Please You, Sejanus: His Fall, Speaking Like Magpies, Cymbeline and Measure for Measure.  Her extensive on-screen credits includeHappy Valley, New Tricks, Last Tango in Halifax, Much Ado About Nothing and King David with Richard Gere

The production is designed by Tom Piper with lighting by Charles Balfour and sound by Jeremy Dunn. Music is by Sophie Cotton and movement by Ayse Tashkiran.