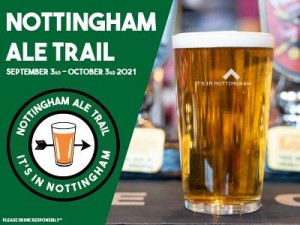 The wait is over as Nottingham Ale Trail makes a return to the city for a month-long campaign to highlight the great range of cask ales available at pubs and bars in Nottingham city centre.

Organised by Nottingham Business Improvement District (BID) and delivered through the It’s in Nottingham channel, the event will be taking place from Friday 3 September 2021 to Sunday 3 October 2021. There will be six themed trails named after a well known friend of foe of Nottingham’s favourite outlaw, Robin Hood for people to follow. These are featured in maps and cards produced by Nottingham BID, that are free for people to pick up at any of the participating venues or *Nottingham Tourism and Travel Centre.

People are being encouraged to visit each venue on a trail, buy a pint or half pint of cask ale and collect a sticker to put on their map or card, with a different sticker available at each stop.  Once all stickers have been collected, take the completed map or card to Nottingham Tourist and Travel Centre to claim a free limited edition enamel pin badge.

If all six ale trails are completed during the month, then as well as the pin badges, people will also be able to claim a free limited edition Nottingham Ale Trail T-shirt from The Stage pub on Wollaton Street in the city centre.

New for this year is a dog friendly trail designed for you to take your four-legged friends on. The Canine Trail is a flexible trail designed for dog owners who’d like to sample some of Nottingham’s finest ale in the company of their faithful friend. The trail works in the same way as every other trail, but people can get to choose which venues to visit from the list. Pick up a Canine Trail card from any of the participating dog friendly venues and select the eight venues you wish to visit over the month, then collect stickers at each stop when you buy a cask ale.

The six themed trails include the King John trail, named in honour of the King of England from 1199-1216. It starts at the patriotically named pub Rose of England on Mansfield Road and takes you down through the city’s Royal Quarter to Yarn Bar, Six Barrel Drafthouse – Victoria, Bell Inn, Lillie Langtry’s, The Three Crowns and The Hop Merchant.

The Sheriff trail starts out near Nottingham Castle, the Sheriff’s old home. It goes past the statue of his arch-enemy and then down towards a canal side escape, featuring: Crafty Crow, The Castle Pub and Kitchen, Fothergills, Ye Olde Trip to Jerusalem, Canalhouse, Fellows Morton & Clayton, Via Fossa and Waterfront.

The Friar Tuck Trail takes in a venue that was once a chapel and several others named after other great historical Nottingham figures: The Cross Keys, Cock & Hoop, Kilpin Beer Cafe, The Joseph Ellis – JD Wetherspoons, The Newshouse, BeerHeadZ Nottingham Station and The Angel Microbrewery.

The Maid Marian trail starts off on Derby Road and ends at one of the country’s oldest pubs, situated on the road named after her. Featuring: Hand & Heart, The Roundhouse, The Dragon, Raglan Road Irish Bar, The Good, The Bad & The Drunk and Ye Olde Salutation Inn.

“We have some great pubs and bars in Nottingham city centre who serve a great range of cask ales, some of which are often overlooked” said Lucy Stanford, Director of Operations at Nottingham BID.   “We hope to encourage people to go on journeys of discovery, sample some great cask ales and in the process, collect limited edition enamel pin badges and a t-shirt for those completing all six.”

Further information about the trails can be found on the It’s in Nottingham website.