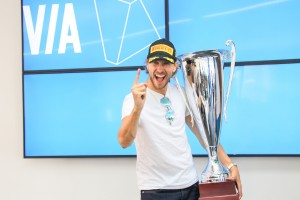 Fresh from his British GT Victory, race car driver Rick Parfitt Junior met up with the team at VIA to thank them for their support as a key sponsor.

VIA a main sponsor of Rick Parfitt Junior held an event to celebrate his win. Rick brought his Championship winning trophy and told stories of the nervous final race with the team.

Rick Parfitt Junior said, “It’s been a hectic season with many ups and downs. I won GT4 a few years ago and to make the step up and win the GT3 Championship was a dream come true. I appreciated the season-long support from VIA, and I wanted to come down and meet the team face to face to say thanks. They’re a great company, and they’re doing amazing things”. 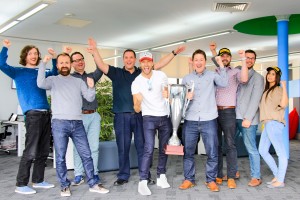 Alex Tebbs, Sales Director at VIA, said, “We want to send massive congratulations to our sponsored driver and all the team that made the win possible. We have sponsored Rick for the last two years and for him to win the Championship with support from VIA is a real thrill for the company. Seeing his trophies first-hand and hearing his war stories were great and the VIA Team had a fantastic afternoon.”

There were a few requirements for Team Parker Racing’s Bentley to win the Championship who were going head to head with the Lamborghini of Team Barwell. The Bentley had to perform a 20-second pit stop penalty due to a misdemeanor from a previous race. However, Rick had overcome this deficit by the midpoint of the race.

After the Lamborghini spun out of control a couple of times, the Bentley finished a respectable third to take the Championship, while Team Barwell was eventually disqualified from the race.

Rick Parfitt Jnr and his co-driver Seb Morris also added the GT3 Pro/Am title to their overall championship, and Rick claimed the Blancpain Gentleman Driver Trophy and, with it, one of the Swiss manufacturer’s limited-edition chronographs.

The race was also a record-breaking day for Rick Parfitt Jnr who became the first driver ever to win both British GT’s GT3 and GT4 titles after claiming the latter in 2013.