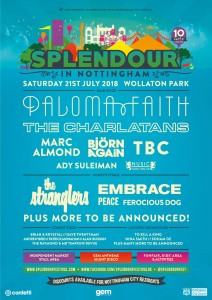 An epic line up of music legends has been added to the special 10th birthday bash of Splendour, with The Charlatans joining headliner Paloma Faith on the Main Stage and The Stranglers headlining the Confetti Stage at the all-day summer music festival at Wollaton Park, Nottingham on Saturday 21 July. 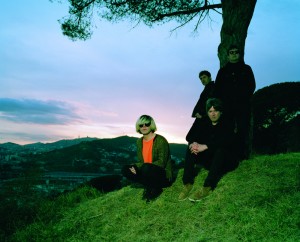 Returning to Splendour 10 years on since their debut are The Charlatans. Almost three decades since bagging their first number one album ‘Some Friendly’ (1990), the indie rockers are still achieving fresh career highs with new music. Alongside a back catalogue of 13 top 40 studio albums to their name and hits including “The Only One I Know” and “One to Another”, the band will generate plenty of excitement for the 25,000 festival goers. 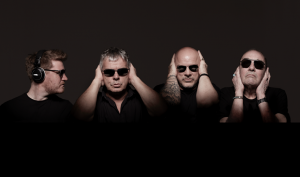 The Stranglers have a vast catalogue of material spanning more than four decades. The influential quartet have an incredible 17 top 40 albums to their name and are probably best known for hit singles “Golden Brown” and “Peaches”. Performing at Rock City earlier this month, the punk-era legends went down a storm with the crowd. 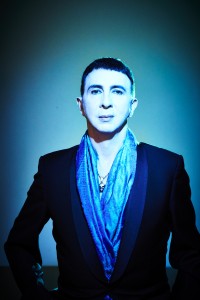 Internationally acclaimed music artist Marc Almond was one half of the electro duo Soft Cell. The band’s cover of Gloria Jones’ Northern Soul classic “Tainted Love” was number one worldwide; listed in the Guinness Book of Records as the record that spent the longest time in the Billboard Top 100 chart in the US; won best single at the first Brit Awards in 1981; and is one of the UK’s best selling singles of all time. Marc has sold more than 30 million records worldwide and will be making his mark at Splendour with hits from his hugely successful solo career, as well as Soft Cell songs.

Björn Again will have the crowd singing along to belters from the very best of ABBA, which includes the chart topping song “The Winner Takes it All” and all time favourite “Gimme Gimme Gimme”. Founded in Australia in 1988, the band is internationally acclaimed and have amassed 5,000 performances in 72 countries in 30 years.

Nottingham lad Ady Suleiman, whose lyrical distinctiveness has garnered fans ranging from Chance the Rapper, Labrinth and Michael Kiwanuka, will bring a smooth blend of neo soul from his debut album ‘Memories’. The opportunity to open the special 10th birthday bash of Splendour will once again be made possible by the winner of Nusic’s Future Sound of Nottingham.

Embrace, with six top 10 singles including England’s official football World Cup 2006 song “World at Your Feet”, are currently amid a UK tour with a brand new album; energetic, feel-good vibes from indie pop band Peace, hot on the heels of their latest studio album ‘Kindness Is The New Rock And Roll’; and six piece folk-rock Mansfield crew Ferocious Dog, with an ever-growing legion of fans, have also been revealed to perform on the Confetti Stage.

To Kill A King, Nina Smith and Soham De are the first acts to be confirmed for the Acoustic Rooms Stage in the courtyard at Wollaton Park, just a stone’s throw away from all the action. Additional artists for the special 10th anniversary Splendour will be revealed within the coming months.

Councillor Dave Trimble, Portfolio Holder for Leisure and Culture said: “Splendour Festival is celebrating its 10 year anniversary and I’m proud of the team at Nottingham City Council, working with DHP, to put on this fantastic festival in Wollaton Park. Tickets sold out fast last year, so with the likes of Paloma Faith, The Charlatans, and Marc Almond performing this year, I encourage Nottingham city residents to get their discounted tickets as early as they can to avoid disappointment.”

The award-winning music event is Nottingham’s favourite family festival, with a kids’ area and entertainers out and about in the crowd as well as Gem 106’s extremely popular Weekend Anthems silent disco, back for the third year running.

Children under 11 will once again be admitted free and discounts are also in place for Nottingham city residents. A standard ticket is £49, coming down to £39 when the discount is applied. Tickets for Nottingham Residents aged 11-17 are £20. VIP packages are also available.