YNot festival is perhaps a hidden gem on the festival circuit, overshadowed by the big boys such as Reading and Leeds, Glastonbury and V, it is nevertheless a great weekend tucked away in the beautiful surrounds of the Derbyshire Peak District.

It also happens to feature a host of great Nottinghamshire acts over the weekend, which is the reason we went over the border to see what was going down.

A combination of weather and transport issues meant it was not until Saturday afternoon that myself and my two eldest minions arrived on site – after a journey involving three buses and a taxi, still after getting pitched up we headed to the site.

The first thing we noticed was the mud, the previous days weather having made its mark, still despite that and our completely unsuitable footwear, we had a quick (ish) tour around the site and, with a bit of help, we managed to locate the Hog and Barrel tent to catch our first act. 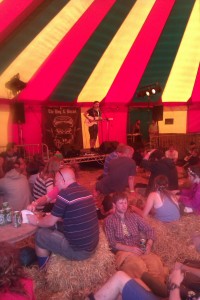 JOSH KEMP is a NottinghamLIVE favoutite and a good sized crowd had packed into the hay floored tent – my favourite stage of the weekend – for his mid afternoon slot, despite things being slightly behind schedule.

As always Josh was in fine, charismatic farm and had some of he crowd dancing, unsurprisingly his cover of the Jungle Book classic I Wanna be like you went down a storm. While looking around the tent it was apparent a number of those in the audience would have resonated with final song The Hangover Song.

Once Josh wrapped up his set it was a quick mud race across to the Allotment stage to catch INJURED BIRDS, a set I was looking forward to having missed them at last months Splendour. There was a disappointing crowd for the band, though I did spot two of the Teenage Mutant Ninja Turtles among the audience. Still those in the audience were treated to a great set from a truly sensational act, though lead singer Sam Kirk’s attempts to get the crowd dancing for last track, the excellent Airplane went largely unheeded. 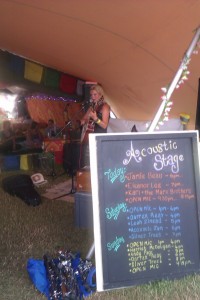 Next up was a bit of a surprise slot in the Acoustic tent where we discovered LEAH SINEAD was playing, as always Leah was on great form though being forced to compete with the sounds from the main stage didn’t make things easy.

THE HERB BIRDS are a band I can’t say I know anything about, despite the fact they have been around for some time, and feature Spotlight Kid’s Katty Heath, so I made sure to get along to the Hog and Barrel stage (again) for their set. A top notch acoustic duo, featuring Tee Dymond alongside Katty, the pair usually perform covers but were making the most of a chance to perform some originals this weekend, although they did manage to throw in a brilliant cover of Mrs Robinson, during a wonderful set.

GEORGE GADD is someone who I haven’t seen much of lately, due largely to him relocating to Birmingham for his studies, so I made the most of catching his set in the Hog and Barrel – and also found myself caught in the midst of a hay fight!

As ever George was in fine form and seemed to go down a storm with the crowd in the early evening, a fun set that ended with a couple of covers including the Busted, erm, classic Year 3000, thankfully George’s version was a whole host better than the terrible original.

We hung around at the Hog and Barrel tent for the final act of the day in there, another Nottingham act by the name of ROGER THE MASCOT (yes seriously), who took to the stage looking rather smart and proceeded to pull of an impressive set amidst the flying hay – encouraged by the compere who called on everybody to launch into a full on hay fight during the final set, my two only too happy to oblige.

Our final performance of the day was back over at the Allotment where the excellent KAPPA GAMMA were performing, once again showing why they are one of the hottest tipped bands in Nottingham with a tight, fun set that rounded off our first day at the festival perfectly.

The overnight rain didn’t dampen our mood and we were up nice and early on Sunday ready for some more Nottingham music – we soon learnt that a UFO had crashed on site during the night – hardly a surprise given the weather – and was now taped off to the left of the main stage – the two NottinghamLIVE minions most excited about this occurrence.

After some breakfast and a wonder round, there is so much going on at YNot it’s incredible, we headed over to The Quarry stage where BBC Introducing took charge for the opening three acts – with today’s trio being all Nottingham performers.

First up, kicking off the day at noon, were MOUNTAIN SCHMOUNTAIN who, as well as being brilliantly named, were an act I’d only heard of in the past couple of weeks – thanks largely to NottinghamLIVE Radio Show regular Mike Atkinson (who was also hurrying around the festival site across the weekend). A fairly new band on the scene, they seemed totally at ease with what was undoubtedly their biggest show to date kicking out a great, loud rock sound that certainly woke the steadily growing crowd up, A great set from a definite upcoming band, though my the younger members of the NottinghamLIVE “entourage” were not overly impressed that they sang a song about dead whales!

We then made our way to the Hog and Barrel once more in order to catch LISA DE’VILLE’s set, one of Nottingham’s most underrated performers. Sadly the Hog and Barrell seemed to be well behind schedule and we only managed to catch the start of Lisa’s set before we had to head back over to The Quarry – still what we did see was, as always, brilliant from Lisa and her band.

The Quarry tent was overflowing as we arrived with the second BBC Introducing act of the day already started. SAINT RAYMOND often gets compared to Jake Bugg, or in some terms tagged as “the next Jake Bugg” which is both ridiculous and an insult to Saint Raymond’s Callum Burrows who is a damn fine performer with his own sound that it is, arguably, more upbeat and catchy than his fellow Nottingham performer. The crowd were certainly buzzing through the set with possibly the best atmosphere I’d seen so far during the weekend, and, as ever, tracks like Fall at your Feet and Bonfires went down a storm. The star continues to shine for this young singer with the addition of a band (this being only the second time, after Splendour, he had performed with one) adding to the sound. 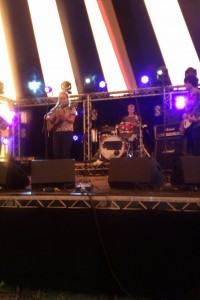 We stuck with the Quarry stage for the final BBC Introducing act of the day, and another NottinghamLIVE favourite in GEORGIE ROSE HOW, who was also performing with her band this afternoon.

As always Georgie was in great form and the crowd reacted brilliantly to a lively set, I’m pretty sure I even heard a “Georgie” chant at one point, this was, probably, my standout set of the weekend and it’s exciting to see where Georgie is headed, a wonderful set with the excellent Twenty Mile Road, a track about the road from Mansfield to Nottingham a particular highlight.

The final act of our weekend came back at the Hog and Barrell tent where the excellent Americana gang THE MOST UGLY CHILD wrapped up the Nottingham offering at this year’s event, the stage was still running well behind, but that didn’t dampen the atmosphere. A great set from another Nottingham act and there probably isn’t a better way to end the things than lounging in hay listening to the wonderful sounds of The Most Ugly Child.

And so came the end of the Nottingham contingent at this year’s YNot Festival, though there was plenty more going on across the various stages throughout the day, as well as a host of other great entertainment including roller disco. Sadly not making it until the Saturday afternoon meant we missed the likes of The Swiines, Satsuma Elephant and the Huskies, though we’re sure they all did a fantastic job representing this great city. 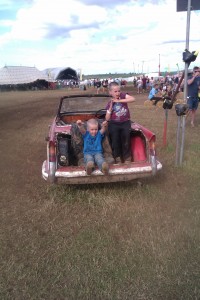 What we did see though was some great Nottingham performances, from stunning solo sessions to great band performances it was great to see so many wonderful acts from our town, and to see the great crowds these performers drew in.

This was my first visit to YNot Festival, but I certainly don’t intend to make it my last, a truly brilliant festival that didn’t allow the weather to dampen spirits and a great way to introduce the eldest two NottinghamLIVE minions to the world of festival camping – they didn’t want to leave.