In contrast to last year’s Dot to Dot, this Bank Holiday Nottingham was graced with the most beautiful sunny day, which meant by three o’clock a flag lined Talbot Street was filled with people chilling with beers and cupcakes to create the ideal summer festival atmosphere. 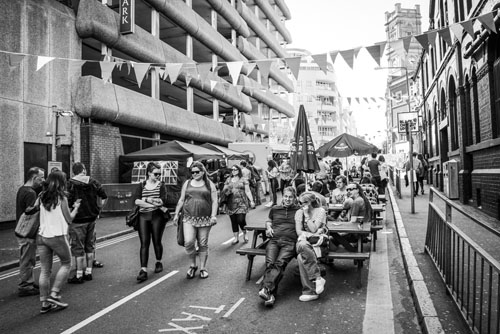 However this didn’t discourage the crowds from filling Rock City’s Main Hall to see the super soulful ADY SULEIMAN performing acoustically but still grabbing the audience’s attention, Ady, fresh from perfoming at Maida Vale after impressing the BBC Introducing team in the East Midlands, voiced his surprise at the audience reaction. 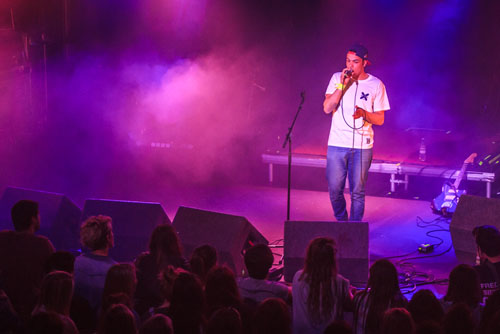 As with any festival with multiple venues it is always hard to plan your day and judge where you need to be next and when.  However after Ady I ventured around the corner to Stealth in an attempt to see I AM LONO, the only problem was everyone was walking in blind due to the contrast from the sunshine and the black hole that was the Live Room!  However once your eyes adjusted your other senses were occupied with not only the nasal delight of sweat and cider but also the great electronic 80’s rock that I Am Lono produce.  Sadly, the local two piece were perhaps billed too early to be truly appreciated as, while there was a steady flow of people coming and going, they all seemed rather unenthused; maybe because it seemed more like midnight at Cookie Club in there than a beautiful sunny afternoon. 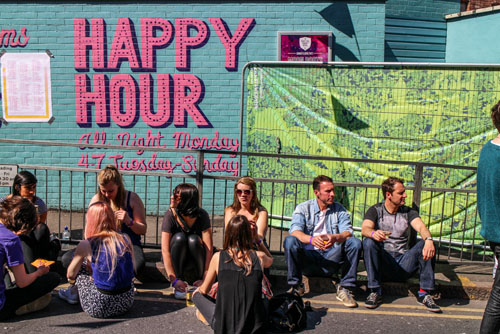 Enroute to the Acoustic Rooms CHLOE HOWL could be heard on the Subculture Stage, sounding a bit like an upbeat indie version of her namesake Letters to Chloe she was a complete contrast to I am Lono which only went to demonstrate the amazing eclectic nature of Dot2Dot, something further reinforced when walking across the balcony into the Red Room where the haunting Bjorkesque GOLDEN FABLE were playing. 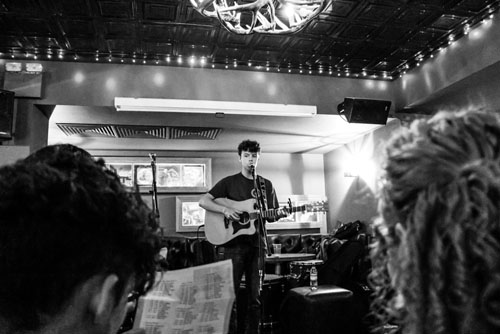 Finally making it into the Acoustic Rooms, it was clear this was a popular choice which maybe down to easy access to the bar and gardens but undeniably due to some stunning and unique music.  Such as ELLIE ROSE a beautiful confident young singer songwriter and FRANKIE RUDOLF a smooth enchanting soft performer. Frankie got slightly lost amongst the chatter in the room to begin with but soon got the crowd’s attention with his catchy tunes and good beats, definitely a Notts lad to watch, try to catch this 16 year old at the Playhouse on 6th July.Up next was Nottingham stable, RYAN THOMAS playing a mixture of originals and covers.  Ryan’s impressive blues style completely captured the audience. 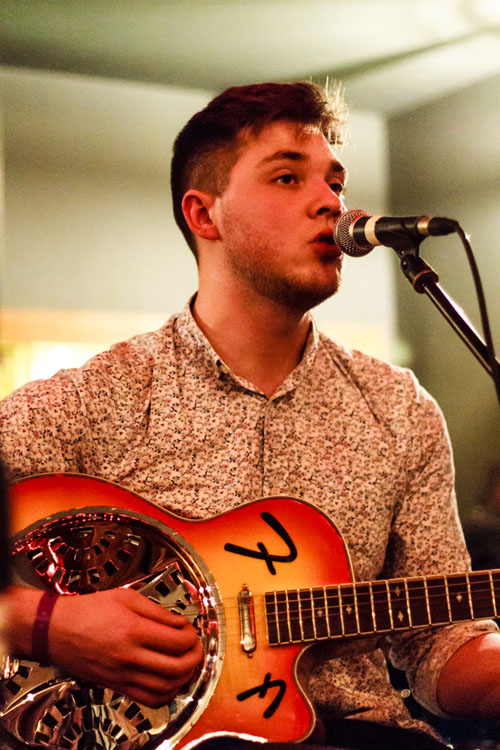 By this time the mood was really picking up, helped by Don Letts djing, who managed to create abeach vibe on The Patio that got everyone dancing.

Next up at Rock City was BENJAMIN FRANCIS LEFTWICH, who played acoustically on his own, but definitely held his own.  Benjamin was clearly a crowd favourite, with his popularity making it seem more like a gig than a performance at a festival; he was noticeably popular amongst the older audience members. The main clue that this was not a gig, however, was the chatter level, which increased towards the end of his set; maybe, it could be argued, because all his songs sound the same and did begin to get slightly boring. 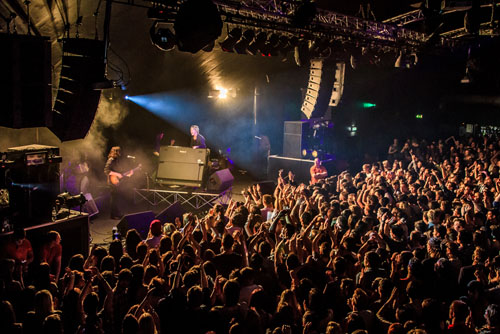 However TOM ODELL’S arrival was a turning point, his amazing live performance changed the whole vibe at Rock City.  Dot to Dot were very lucky to get him this year before he supports The Rolling Stones with a certain Jake Bugg this summer at Hyde Park. Tom is a true British eccentric musician; the radio does not do this enigmatic performer justice.  His songs suited City as they were surprisingly heavy for piano based music; he quite literally rocked it, and one point it looked like he might actually rock his piano straight off the stage.  For me Tom Odell was the highlight of the day, however there was plenty more to see. 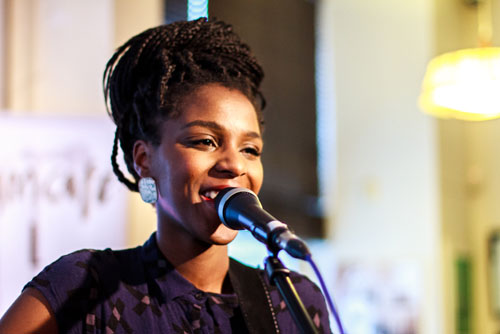 Heading down to the Hockley end of town it was clear to see The Bodega was only for the hardcore and the early as the queue was almost up to Lloyds.  The Corner and Brew Dog also had queues which was disappointing as LONDON GRAMMAR and FEROCIOUS DOG were playing, however it did mean that I got to see the stunningly beautiful JOY MUMFORD at Jam Café performing her charming love songs that created a chilled vibe, which was a welcome break from the rushing from venue to venue! 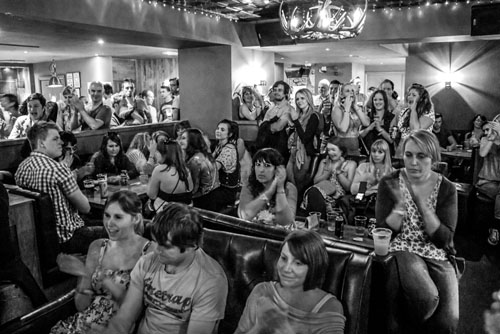 On the rush back to see HARLEIGHBLU at Acoustic Rooms there was just enough time to stop at McDonalds which seemed like an addition to the festival with 90% of the customers sporting purple wristbands! This boost of energy was needed to tackle the mosh pit that had sprouted on The Patio.

It was more than the door that divided the Acoustic Rooms and The Patio, the contrast of Harleighblu’s beautiful voice and the chaos that was ensuing outside was stark.  Harleighblu brought with her a celeb entourage in the form of Lady Sovereign.  Although by 9pm the atmosphere in Acoustic Rooms was no longer chilled; the sunshine and beer clearly took its toll on some more than others. 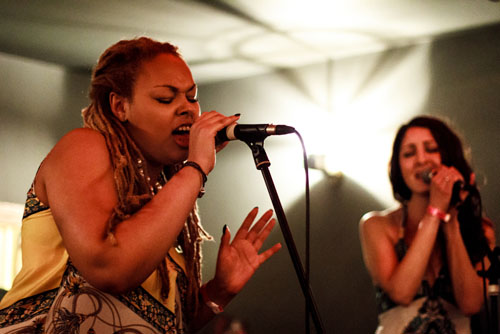 Although I really wanted to get a good spot for THE 1975I could not resist waiting for local band SPACESHIPS ARE COOL to start as they arrived early dressed in orange boiler suits and bringing with them a multitude of accessories including a bubble machine and projector; it was obvious this was going to be a visual spectacular. They definitely managed to build a sense of anticipation as it seemed to take them forever to setup and they jokingly said this was a very non acoustic “acoustic setup”. 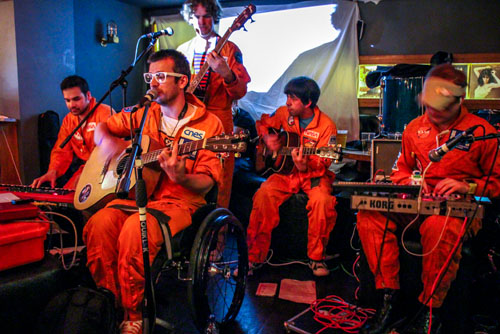 Rushing over to Rock City to see the headline act, The 1975, was unwarranted as in true rock n roll style they came on late.  This Indy pop act is fronted by Matthew Healy, who was actually managing to make girls swoon.  He even jumped down, mid song, to help Trev Cole (Dog is Dead) out the hands of the bouncers after an epic crowd surf.  The 1975 were total crowd pleasers and got the crowd going wild for the hit record Chocolate; even the hardcore foot shufflers were dancing away. 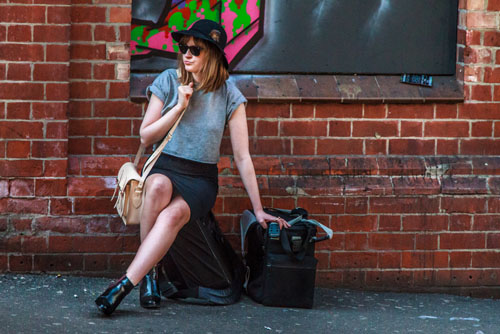 Talking to people throughout the day no one really knew where they were heading next, one guy described his day as “pot luck” which is a very good way to sum up Dot to Dot, although in my opinion this year the pot was filled with goodies!

Review: Dick Venom & The Terrortones – Invasion of the Spider Queen