From humble beginnings back in 2010 the Macmillan Festival has grown to become on of the best rock festivals in the UK, while also raising thousands for Macmillan Cancer Support. This year the show has gotten even bigger than ever, adding the Rock City basement to an event that already takes in the Rescue Rooms, Stealth and Spanky Van Dykes – plus there is the small matter of Macmillan Fest Bristol taking place at Thekkla a week later. 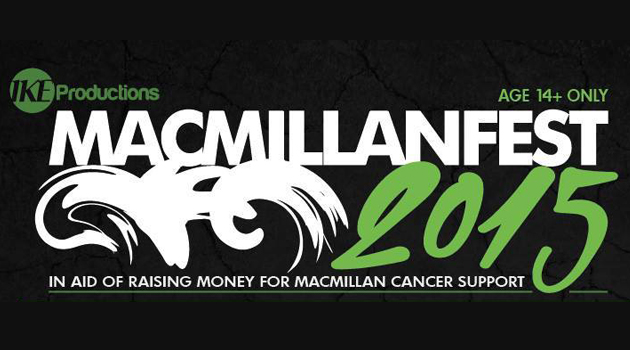 This year the team behind the festival, IKE Productions, have lined up the ideal headline act, Nottingham’s very own EVIL SCARECROW, a band who’s rise seems some what parralel to that of Macmillan Fest, growing from small acorns (albeit it ones with extremely scary make up) to a huge band that have been smashing it at the likes of Download and Bloodstock in recent years. Evil Scarecrow (who also headline the Bristol leg) will be the ideal band to round off this years festival when they headline the Castle Rock sponsored Rescue Rooms main stage on Saturday night.

The main stage will also see sets from UNEVEN STRUCTURE, THE FIVE HUNDRED, RED RUM, TAKEN BY THE TIDE, FROM HER ASHES, WE ARE TYRANTS and CACODAEMONIC.

The Stealth Stage, which is this year being sponsored by Toxic Online, has a stellar line up headed up by Northampton cinematic, alt-prog rockers VOICES FROM THE FUSELAGE. Joining them will be the ace SKARLETT RIOT, THE ONE HUNDRED, SHIELDS, CABIN BOY JUMPED SHIP, FAMOUS FOR NOTHING, AN EMPIRE WILL FALL, THE PARALLEX METHOD, VALIS ABLAZE and CONFLUENCE.

Rock City’s Basement is the newest stage to be added to the festival which is now set over six stages – not bad for an event that started off in the long since defunt The Central. Sponsored by Alibi Clothing, the Basement will be the place to be to catch sets from LITTLE BRIBES, THE SPECIES, NEVERISE, COLT 45, SILHOUETTES, AS DECEMBER FALLS, LACEY and headline act FEARLESS VAMPIRE KILLERS.

Having been added to the set up last years Spanky Van Dyke’s will once again be hosting one of the stages, and one that looks set to be extremely loud. Nottingham hard rockers WIDOWS top the line up here and will be making plenty of noise we’re sure. Before therm there will be plenty to more to catch with sets from MAMMOTH WING, BLUEBIRD, SKAM, CHRONICLES, CHASING CADENCE, NO CONSEQUENCE, WITHOUT GRACE, EMPIRE 35 and BONA CHINA.

Red Rooms has been a key part of Macmillan Fest since it moved to the Rescue Rooms back in 2011 and the upstairs room will again have plenty of great music to catch. Notts party band DEAF BRIDGES are headline act on this stage, which is being sponsored by Notts magazine Left Lion. There will also be sets from MANNEQUIN, DEF GOLDBLUM, JC DECEAUX, WE ARE CARNIVORES, the acely named LITTLE WHORES ON THE PRAIRIE and AMY & LILLY.

Last up is the Rescue Rooms main bar, which hosts the acoustic side of Macmillan Fest. Last year this was sponsored by ourselves here at NottinghamLIVE (having already sponsored the Red Rooms stage since 2011), this year NG Digital (of which we are of course a part) are taking over the sponsorship reigns for a stage that will be headlined by one of the hottest tips on the Nottingham scene, EYRE LLEW, a band that really have to be seen. Also playing the Acoustic Rooms stage will be SAMUEL J LAWRENCE, JOSH KEMP, DANIEL DOBBS, BRAD DEAR, SAM JONES, NIALL FITZ, RICHARD JENKINS, BRAD MATTHEWS and MATT HUMPHRIES.

As you can see, Macmillan Fest really is shaping up to be even bigger and better than ever, no mean feat considering the success of recent years, and it really will be an unmissable event, not to mention the fact it will be raising money for a fantastic course.

Tickets are, at the time of writing, still available for the absolute bargain of just £10 in advance – and considering the line up we imagine it could well sell out in advance, so we highly recommend getting your tickets now, they’re available here

Be sure to tune in to NG Digital this Friday for the return of Girl on the Rock Show which will feature a preview of Macmillan Fest.