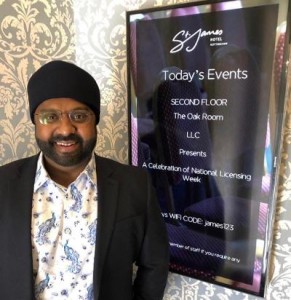 This week is National Licensing Week (NLW), a five day annual event which raises awareness of licensing and its role in everyday lives which is often invisible to the public until something goes wrong.  NLW is designed to change that and raise awareness across the country.  The underlying message is that “licensing is everywhere”.

In June 2019, Licensing Law Consultancy organised and hosted the first large scale event of its kind, a party in Nottingham to celebrate and raise awareness of licensing and the role it plays in everyday lives.

The event was attended by members of the Institute of Licensing, National Licensing Week, Nottingham Business Improvement District (BID), Pub Watch, Hospitality Association, other industry representatives such as the Gambling Commission and leading operators with a local and national presence as well as leading businesses and professionals from all sectors. Guests were treated to canapes, dinner, complimentary drinks all evening and received designer gifts from global fashion retailer, Paul Smith.

The Chair of the Institute of Licensing, Dan Davies said:

“I am delighted to support this event and I thank Walaiti Rathore for having the vision and energy to make this happen. Licensing touches the body politic at some of its most sensitive spots – covering areas such as alcohol sales, taxi and private hire, animal premises licensing, gambling and the protection of vulnerable people and much, much more. I think the general public are not fully aware of the role that licensing plays in public protection and Licensing Law Consultancy’s event will have done much to raise that awareness.”

Following the success of the event, preparations were underway before the lockdown for a follow up invitation only event on a larger scale. This was due to take place on Friday 19 June 2020, the final day of NLW. The event will now go ahead at a later date after the necessary phase of the lockdown is lifted and hopefully before the end of the year.

“My determination to repeat the event this year has only got stronger during these very challenging times. It is now more important than ever to highlight the importance of licensing and the important role it plays in everyday lives.

Once again, the idea will be not only to involve representatives or members of organisations within or closely connected to licensing but also people from businesses and professionals with no such connections. I believe this is the best way to reach out to the wider public.

I would like to thank the Nottingham BID for their ongoing support for this event and for sharing the vision. A special mention also for Carter Legrand Wealth Strategies, Freedom Brewery and Alea for their support.”

A new date for the event will be announced soon.

NottinghamBUSINESS: FINALISTS ANNOUNCED IN THE COMPETITION TO FIND THE CITY’S BEST INDEPENDENT BUSINESS