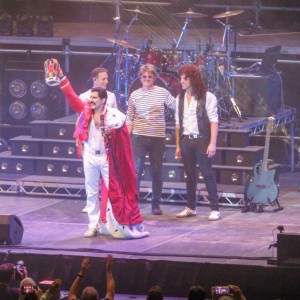 Despite the fact that Freddie Mercury was taken from the world of music way too soon, Queen have continued to enjoy popularity.
Their longevity thanks to their unique sound at the time, Freddies vocals and some damn fine songs. Being so unmistakable can work both ways, copy the look visually and impersonate the sound, yeah, it’s start but when it’s a super group such as Queen, you pretty much have to get it spot on. Last night Killer Queen played the Nottingham Motorpoint Arena and thankfully fell into the latter category.
On the day the real Queen announced a tour, OK the two remaining members, the tribute band Killer Queen manage to pretty much fill the arena, which when you think about it is pretty incredible and they’re actually the only tribute to have sold out the same arenas as Queen in their heyday. 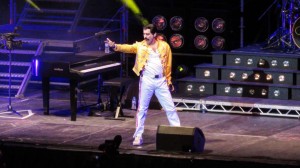 Following the release of the Bohemian Rhapsody film Queen have enjoyed another surge in popularity, gaining an army of new fans along the way. Young and old sang and danced the night away together to the groups hits in the closest thing you’ll get to see in an arena to the group themselves in their 80’s prime.
Frontman Patrick Myers has been portraying the legendary Freddie Mercury for over 25 years. In that time he has perfected his art. From the moment he struts on stage, he fills it with that Mercury showmanship. Visually he looks like him. The wardrobe is spot on, he even has the overbite – does that add to the sound too? Possibly, whatever, he undeniably sounds like the legendary front man too and has the same unmistakable energy. 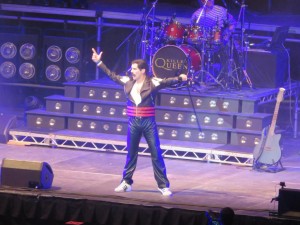 With him of course are his band. Our Brian May with the unmistakable hair and stunning guitar licks. Tall like May, he’s captured the mannerisms of the guitar hero too. Roger Taylor has his moment too with a drum solo, John Deacon – ok, not much is made of him. One of the biggest cheers of the night comes when stills of the real Queen members are shown on the big screen. What I found quite refreshing about the gig was that people just appreciated the act and didn’t get silly approaching the stage as if its the real thing. Maybe they get it at other venues but I didn’t witness it here, just one perfect big celebratory party for Queen and their music. 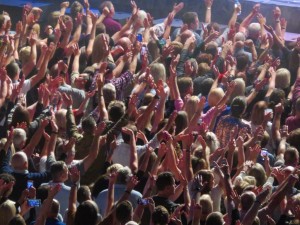 I’d call myself a Queen fan. Not a super fan by any means but a lover of the better known hits and that is exactly what the group delivered. There was perhaps one, the one with Brian May on vocals, that I didn’t know, the rest of the set list was stuffed full of the classics, hit after hit followed, over 25 in total, including It’s a Kinda Magic, I Want to Break Free, Somebody to Love, Another One Bites The Dust, We Will Rock You, all had the crowd joining in, arms aloft and singing our heads off. 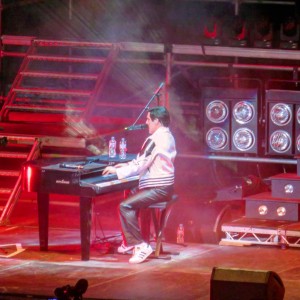 If you can draw your eyes away from Freddie then you’ll notice that they’ve put the work in aesthetically too. Lights, visuals on the big screens, and the occasional pyrotechnic.
Thank you Killer Queen for helping keep the memory and the music alive. Long live the Queen.
By Tanya Louise
Editor
Visit My Blog
Visit My YouTube Channel
Find Me On:
Twitter Instagram and Facebook
Photos by Richard Newbold