It’s fair to say that from humble beginnings at The Central back in 2010 the Macmilan Fest has grown into a huge behemoth of a festival, moving up to the Rescue Rooms in 2011 where it has gone from strength to strength.

It goes without saying that we’re hugely proud to have been supporting this event since 2011 when we first sponsored the Red Rooms stage – where a certain Saint Raymond (then a duo) opened proceedings. We’re pleased to say that we are continuing our support this year and will be sponsoring the acoustic stage which will be in the Rescue Rooms bar area.

The line up for the stage is looking fantastic with much hyped Essex rockers HYPE THEORY topping the line up on the stage. Also performing on the NottinghamLIVE stage will be FALLING UP STAIRS, VANITY BOX, LACEY, ARTHUR WALWIN, LAYBY, GARDEN STATE, AS DECEMBER FALLS, A CITY ALIGHT and KAIZEN. 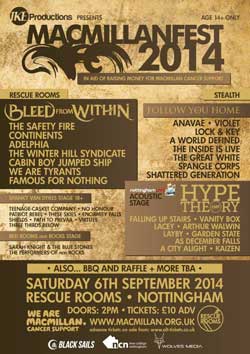 NottinghamLIVE Editor Darren Patterson was pleased to continue the relationship between the two groups:

“We’re extremely proud to have been sponsoring a stage at Macmillan Fest for the last four years, not only is it a great festival but it raises a huge amount of money for a fantastic cause. The work that Kris Davis and his team at IKE Productions put into making sure they present a fantastic festival every year is immense and we’re glad to be able to play a small part in such a great event”

“The partnership between NottinghamLive and Macmillan fest has been nothing but fruitful and forever progressing. Having them support up and coming local artists is an important contribution to the Nottinghamshire music scene. May they continue to do so.”

As well as the NottinghamLIVE stage the festival this year will have more stages than ever this year with Spanky Van Dykes becoming part of this years event where you’ll be able to see sets from TEENAGE CASKET COMPANY, NO HONOUR, PATRIOT REBEL, SHIELDS, VIRTUES, THESE SKIES, ENORMITY FALLS, PATH TO PREVAIL and THREE THIRDS BELOW.

The Red Rooms stage is being presented by NCN this year who will have a host of performers from their NCN ROCKSprogramme as well as a set from SARAH KNIGHT AND THE BLUESTONES.

Stealth will be kicking it up with sets from FOLLOW YOU HOME, ANAVAE, VIOLET, LOCK & KEY, A WORLD DEFINED, THE INSIDE IS LIVE, THE GREAT WHITE, THE SPANGLE CORPS and SHATTERED GENERATION.

As ever the Rescue Rooms will host the main stage of the event and features a killer line up headed up by the excellent BLEED FROM WITHIN. Joining them will be THE SAFETY FIRE, CONTINENTS, ADELPHIA, THE WINTER HILL SYNDICATE, CABIN BOY JUMPED SHIP, WE ARE TYRANTS and FAMOUS FOR NOTHING.

Add to that a BBQ and raffle and the unveiling of event organiser Kris Davis’ Macmillan Fest tattoo – you can still donate to that cause here, and it’s shaping up to be the biggest and best Macmillan Fest to date.

Tickets are a staggeringly bargain £10 in advance, available here, and we highly recommend you get yours as soon as possible.

We’ll have plenty more on Macmillan Fest in the run up to the event, including a chat with Kris about the evolution of the festival since its inception so keep an eye on things, and be sure to check out the official event page for the event on Facebook