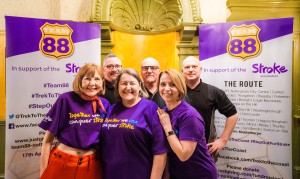 Team 88 is the brainchild of Roy Bond, a Magician from Nottingham, who aims to raise £4,000 for the Stroke Association by walking with fellow team members from Nottingham to Mablethorpe in April 2019.

Roy was born in Nottingham, grew up during his early years on the East Coast returning to Nottingham as a teenager, but kept his links with the East Coast. It’s a journey he’s traveled many times, but never walked! Roy’s life changed when he was just 6 years old and his mother had a stroke which left her with epilepsy, memory loss and paralysis. Returning to Nottingham at the age of 12 Roy and his mum moved in to supervised accommodation where he learned to care for mum and she learned to live independently. Roy says “I wish I had had the support as a child that is available now and I hope by undertaking this challenge it will help raise awareness for carers and maybe help someone cope with the aftermath of such a life changing medical condition.”

Team 88 will be walking 88 miles from Nottingham City Centre to Mablethorpe between April 17th and April 19th 2019 ending their challenge with a welcome reception at The Dunes Complex. Roy will be joined on the walk by stroke survivor Adam Hayes from Birmingham. Adam was just 29 when he had a stroke.

Following specialised non-invasive surgery carried out using a ray gun to pin point the part of his brain that was damaged and cut it out Adam had lots of physiotherapy as well as speech and language sessions. He was determined to get well and has been successful at rebuilding his life. He does, however, still have residual right side weakness and he suffers hemiplegic migraines. The stroke has also taken its toll on his mental health. Adam says “I hope by sharing my story and continuing with my fundraising efforts I can help raise awareness to others how long and lonely the journey to recovery can be. I have taken part in a Tough Mudder fundraising event for the Stroke Association which was a particular physical milestone for me. I expect this Nottingham to the East Coast walk will be another challenge!”

Adam firmly believes the Stroke Association’s ‘ACT F.A.S.T’ campaign saved his life and will continue to support the association’s great work. The team is further supported by another walker Ian Stoddart, a graphic designer from Nottingham and long term friend of both Roy and Adam’s. Knowing how close the cause is to their hearts and having recently lost a beautiful young friend to stroke Ian jumped at the chance to get involved in this walking challenge! A similar story from Craig Land who will be personally supporting Adam during the walk.

Debbie Prince, based on the East Coast and an old friend of Roy’s, has also joined the team and is well known for her various charity fundraising efforts having completed numerous marathons etc. On agreeing to join the team Debbie said “I thought I would be a good addition to the group and rest assured I will be motivating you all along the way!” Deborah Labbate, a Business Adviser from Nottingham and a friend and colleague to Roy and Adam through their work with Notts Tweet Up, is heading up the organisational side of the event along with logistics, fundraising, social media and PR. Deborah also plans to join the team on the last leg of the walk once she has parked up the support vehicle and she will be joined by Team 88 supporters Sharon Moir, Head of Faculty at Bilborough College and Notts Tweet Up member along with Cathy Stoddart, a friend of Roy’s and Ian’s wife.

Keep up to date with our fundraising progress: https://www.justgiving.com/fundraising/Team88-Nottingham-EastCoast-Walk The route