80’s music fans are set to see a different side to one of the era’s stand-out performers when he takes to the stage in Nottingham this autumn. 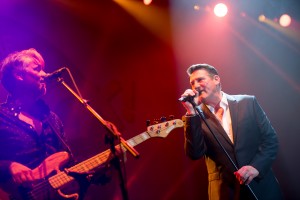 Tony Hadley will be staying true to himself with a mixture of old classics and new anthems at the StepBack! 80s concert

Tony Hadley is performing at the StepBack! 80s Concert at the Motorpoint Arena Nottingham on Saturday, October 27 and is coming equipped with new material up his sleeve.

The former Spandau Ballet lead singer has recently released a new solo album called Talking To The Moon, and is preparing to treat fans to some of his new pop-rock tracks in between belting out 80s classics such as Gold, True and Through the Barricades.

Speaking ahead of his date in Nottingham, Hadley said: “Nostalgia concerts are great fun and are essentially indoor festivals – I have some great memories of performing at the Royal Theatre Concert Hall in the centre of Nottingham.

“The question I’m always asked since I went solo is can I still sing the classic songs? Yes I can, and yes I do, but I will be throwing in a couple of songs from the new album as well.

“I love being in the studio but the best moments for me are when I walk on to that stage – I have a great band around me and my voice is still in fine fettle, and I feel very lucky to be doing what I do.”

Over the past 12 months the 58-year-old has wrapped up his new album – which has featured on BBC Radio 2’s Album of the Week and reached number four in the UK Independent Albums Chart.

Hadley has also released two rousing and romanticised singles from his new collection –Tonight Belongs To Us and Take Back Everything.

“I feel like I’m a brand new artist,” added Hadley. “The new album is pop-rock but I’m not someone who likes to dwell on the past – I have tried to incorporate some modern technology in the production.

“A lot of the songs are anthemic – some people have said to me that Take Back Everything sounds like the new James Bond theme tune, but I’m just trying to do things that are slightly different – and have treated each song as though they are standalone singles which is why it has taken a long time.”

As for the name for his latest musical adventure, Hadley revealed: “I’m fascinated by space and science anyway, and where I live in the middle of the countryside there’s no ambient light so the stars at night have that wow factor, and if you get a full moon it’s as clear as a bell.

“At some point in our lives we’ve all looked up at the sky and asked ‘what’s life all about? What are we here for?’ and I thought Talking To The Moon summarised it perfectly.”

Tickets for the StepBack! 80s Concert can be purchased by visiting www.stepbackconcerts.co.uk and www.motorpointarenanottingham.com.