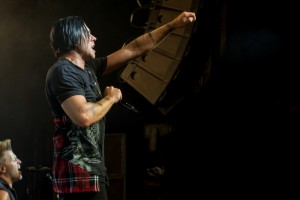 NL: Outsider Tour, after the success of the album how has it been reviewed by fans?

NS:It’s been welcomed really well, people have been very excited and people see a vision we set to achieve on this album. It’s the second record with Matt on the vocals and it’s been six years he’s been in the band and It’s amazing. I think there is a bit of confidence Matt portrays on this album that he’s certainly had in the vocal booth and with his contributions for writing, I think that just comes from being on the road for that amount of time and that came through on this album and the record represents going into a journey of the unknown. We wanted to  make sense of the chaos and uncertainty and being able to step back and kind of and make sense of everything from a distance and that’s what Outsider concept talks about.

NL: Three Days Grace has played Rock City before how different is it to be back this time round?

NS: We have a gear over here that we leave in Europe and the UK so we have better staging, we are not just flying over with our guitars and stuff we have a whole set up and yeah we are just going to play a bunch of new stuff and we are excited right now, just kind of embarking on a world tour this is only the second show so the energy is up and the band is excited, so I think that energy will flow off the stage tonight. 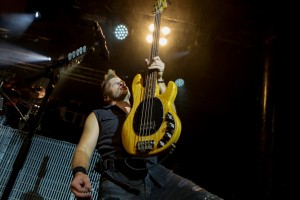 NL: What can the fans of Nottingham expect tonight’s show?

NS: Well, an injured foot haha, no its going to be a good one tonight we have been excited to be coming to the UK for a while now, some of the best rock shows are over here. There has always been a passionate strong fan base for rock music and open mindedness to new things and that’s one of the reasons we love about the UK, a lot of fresh new music comes from here, rock n roll is still alive and well.

NL: What is your favourite song on the set list to be played this tour?

NS: Right now I’m really enjoying playing Infra-Red, its deffo a fan favourite on this album, it went to number 1 in the USA it’s a good crowd jumping song and a lot of fun to play. 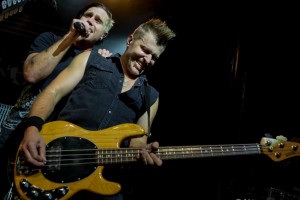 NL: How have fans been since Matt joined the band?

NS: Incredible, it’s amazing to see how many fans are on this journey with us because I consider being in a band a journey as you don’t know what’s round the next corner, things can change there is always a moving target to what you want to achieve but to have so many fans on board on that journey is something we have always valued. They have accepted him really well, we are playing some of the biggest shows we have ever played in our entire career.

NL: You are headlining at the iconic rock venue Rock City, is this one of your best venues to play compared to others?

NS:It’s definitely legendary. I like venues that have the upper balcony you can kinda look everyone in the eyes, there is something to be said about a rock show where you can see everyone its very cool to play giant stadiums or massive festivals like that, but there is a personal connection in a venue like this you can feel the energy and you give that energy out and the fans give it back to you. 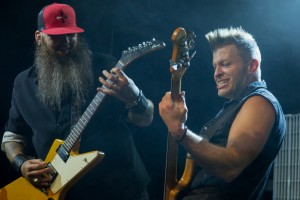 NL: Having been a fan of Three Days Grace since the self titled album back in 2003, what is next for the band after the tour?

NS: Well after this tour we do a Canadian headlining tour that’ll take us right up until Christmas, we haven’t announced the next tour but it’s a big one.  It’ll take us through the USA and Canada. Its going to be a big arena tour I just can’t announce it yet. We are really excited to hopefully get back here next year to play some of the big festivals like Download Festival, Rock Am Ring we are focussed and set to look at Europe next summer.

NL: Matt what’s it like being part of Three Days Grace?

Well he’s family, he’s Brads, our bass player’s younger brother, he’s always been around and what a lot of people don’t know he actually co-wrote the first Three Days Grace Album, he’s a cool writer on Scared and Let You Down which we will play Let You Down tonight. He was a teenager and always kind of there so we were kind of a garage band  or in Brads basement and he was kind of there and we have always written about personal experiences in our lives and so Matt being family he’s kind of gone through all those things with us as far as loosing some of our buddy’s  and gone through crazy stuff everyone goes through, he wasn’t ideal for the band but he was the only decision and he was the obvious choice because of that family connection and being able to take ownership of our lyrics we have always been very collaborative song writing, everyone writes lyrics and everyone writes music and he’s a fantastic song writer as well so it was a really good natural fit. 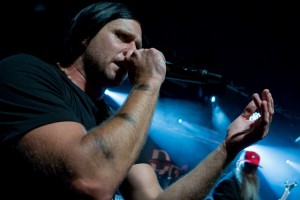 NL: Last but not least, what’s it like breaking the record for the most No.1 Billboard Mainstream rock songs ever?

That was pretty surreal actually if you had of told me when I was a kid, when we were that garage band, that someday we would break the all time record for most number 1 hits of rock songs in America  that would be crazy, but we don’t get wrapped up in all the statistics and numbers we just keep our heads down and try to work as hard as we can. We will focus on the stats when we are old and grumpy drinking Scotch on the porch but it’s the fans that make that all possible and to have that much support, we just owe it back to the fans, that’s the only reason we are here is the fans to even mention Van Halen and take the record out was a pretty big moment.