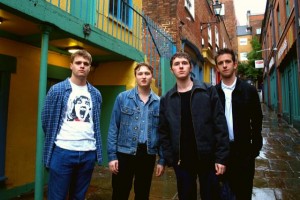 “Cucamaras have a knack for matching indie songcraft with buzzing ear-worm melodies.“
CLASH
Just as things are heating up this July, Nottingham four-piece CUCAMARAS make their return with a refreshing new single: ‘Keep It Cool’
WATCH THE VIDEO NOW HERE:
https://youtu.be/ONWMI8TZl3A
Released this Friday (24 July,  via Ditto Music), ‘Keep It Cool’ is the first of two ice-cold, lo-fi cuts set to materialise through the haze of Summer 2020… Pre-Save here: https://ditto.fm/keep-it-cool
A song that finds the Cucamaras refusing to break a sweat amid a Summer like no other, ‘Keep it Cool’ is laid-back of vibe and languorous of delivery; a fuzzed-up cocktail of surfing guitar riffs, laconic vocals and heatwave-hot solos that all add-up to track knowingly true to its title.
A tale as old as time, with a twist, ‘Keep it Cool’ finds the Cucamaras hung up on a girl, trapped in a love triangle and out-muscled by another guy – and his considerable A.C. unit. Written by the band’s Olly Bowley, he says: “It’s about liking a girl who has a boring boyfriend with a very well air-conditioned room…”.  Taking the mic for a track packed with razor quips and dead-pan delivery, Bowley sings calculated words of caution: “Are you really considering? It wouldn’t be sensible, you’re only dispensable, to him”; in the slim hope of getting one over his refrigerated rival.
Funny and fiery, ‘Keep It Cool’, is the first of a dynamic double helping of new tunes from Cucamaras, and will be followed by upcoming single ‘Window Seat’ in the coming weeks. Rising a wave of inspiration, both tracks were written in the same week and then recorded on the same day at Rainy Daze Studio in Nottingham, with additional mixing and mastering by Joe Fisher and Elliot McCoid.
Familiar to many as staples of a Cucamaras live set, the tracks are already some way to becoming fan favourites and will rightly appear together on an upcoming AA side studio release. “The two tracks are always played back to back live just like they are on the studio version” Josh of Cucamaras says, “capturing our live sound in the recording was really important to us.”
Taking their name from a shot bar in Nottingham, it’s perhaps fitting that this four piece earned a reputation of their own for serving up intoxicating alt-rock slammers. Inspired by the angular guitar work of Parquet Courts and ‘Room on Fire’-era The Strokes, while infusing the contemporary lyrical witticisms of Willie J Healey or Sports Team’s Alex Rice, Cucamaras stake their place as one of the Midlands’ most insurgent new talents.
Releasing their debut EP ‘Till The Meter Runs Out’ and stand alone single ‘Please Not Tonight’ shortly after forming in 2019, word has since spread like wildfire with BBC Introducing being quick off the mark to proclaim themselves fans from the very beginning. Notching up over 25,000 streams on Spotify in no time, the band have gone on to headline SOLD OUT shows in Sheffield and Nottingham, and spent 2019 touring the nation alongside kindred spirits like Sheafs and No Hot Ashes.
Returning with two flaming new tracks this Summer, the ‘Keep It Cool’/’Window Seat’ AA single finds the band combining the high voltage, lo-fi thrills of Car Seat Headrest or Cage The Elephant with the incisive contemporary relatability of Sports Team or Sorry; continuing a blazing trail into what looks to be a very bright future for Cucamaras.