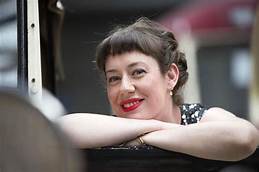 Up north, pianist/singer Wendy Kirkland’s band is joined by Nathan Bray on trumpet at Oscar’s in Newark on Friday May 10 from 8.30pm.  Bristol based singer/songwriter China Bowls’ vocals remind me of a young Amy Winehouse; she visits Peggy’s Skylight on George Street in Hockley to strum guitar and sing her intelligent songs for Root Down Friday from 7pm, after which, DJ Daddio plays until late – doors open 7pm, entry is £8.
Paul Deats plays his grand piano between 2-5pm for afternoon tea at the same venue on Saturday May 11 and from 7pm the Hopkins Hammond Trio (guitarist Matt Hopkins with Ruth and Scott Hammond on organ and drums respectively) perform tunes by John Scofield and Pat Metheny alongside their own compositions, entry is £10. Saxophonist Rick Woolgar joins PRS (Si Potts on drums, Steve Rodda on guitar and Mat Short on bass) to perform standards from 3-5pm at Stray’s Coffee in Newark.  Acoustickle present a live jazz and soul spectacular in the beautiful Spiegeltent in the Market Square, celebrating their tenth anniversary and featuring pianist Pete Beardsworth who is influenced by Chick Corea, alongside Major Ruse, Chloe Rodgers and Mollie Ralph plus others. Tickets are just £10 available in advance from Gigantic.
Saxophonist Julian Costello’s Quartet perform for Peggy’s Sunday Mezinee concert on May 12; doors open at 12 midday and their show runs from 1-3pm, entry is £8. I’m singing with Shell’s Belles little big band at the Lion in Basford from 1.30-3.30pm. Back at Peggy’s in the evening, Jazz Steps launch an extended tour of renowned International ECM artist and recent Swiss Music Prize winning vocalist Elina Duni with virtuosic, award-winning guitarist Rob Luft; their international sounding Songs of Love and Exile are enhanced using loops.  Entry to this launch show is £10 as are the subsequent dates at the Libraries; Beeston on Monday 13, Worksop on Tuesday 14, Southwell on Wednesday 15 and West Bridgford on Thursday 16.
Give the Omega Band a good send off as Green King call time on their 40 year residency at The Bell Inn on Angel Row on Monday May 13 from 8.30-10.30pm. The Alfa Big Swing Band are at the Village Inn, Marehay from 8.30pm.
Dexter’s Jazz Club is on Tuesday May 14 with Nathan Bray backed by Barry Lee on keys, Clive Loveday on drums and Simon Paterson on double bass at the Headstocks in Cinderhill from 8.30pm entry is £6.
On Wednesday May 15 Pete Beardsworth is Sounding Off at Peggy’s from 7pm, his gig is free entry. Legendary reeds maestro Frank Brooker brings his Happy Chappies from Yorkshire to the Risley Park Jazz Club from 8-10.30pm, admission is £9.
Guitarist Thom Whitworth’s trio leads Jazz Discovery Thursday at Peggy’s on May 16; entry is £5 and doors open at 7pm. The Nottingham Rhythm Club at The Stadium Leisure Snooker Club, Nottingham Road, Basford host the Jeff Barnhart/Enrico Tomasso, Armstrong Legacy Band from 8-10.30pm, doors open at 7pm and entry is £9/8 members or £6 NUS.
Where no entry fee is mentioned please assume your ample purchases from the venue will support the live music.
Share this content....