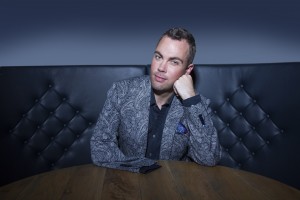 Born without his right hand, piano star Nicholas McCarthy is at the forefront of British music talent, championing accessibility to music for all by using his UK tour to promote not only his top ten classical charting album, Solo, but also to share his motto that “anything is possible”.

On Sunday 25 September, he will be performing at the Royal Concert Hall Nottingham as part of the venue’s popular Sunday Morning Piano Series.

At aged 14, Nicholas was told that he would never achieve his dream of becoming a concert pianist.  However, in 2012 at the age of 22, he graduated from the Royal College of Music.  He made media headlines across the world as the first one-handed pianist to graduate from the prestigious college in its entire 130-year history.

In the same year, Nicholas proudly played to a worldwide audience of half a billion at the closing ceremony of the Paralympic Games in London alongside super band Coldplay.

Early in 2015, Nicholas was thrilled to announce his exclusive record deal with Warner Music.  His first album, entitled Solo, features 17 stunning pieces of left hand repertoire spanning three centuries.  The album has been released around the world to great acclaim, securing a top ten classical chart position and 5 star reviews. Being named ‘Album of the Week’ on Classic FM upon its release, Solo was also selected as one of Amazon’s ‘Best of 2015.’

Another highlight for Nicholas was becoming a recognized ‘Yamaha Artist’. Yamaha is always Nicholas’s piano of choice and his album was recorded on the flagship Yamaha CFX.

The Sunday Morning Piano concert in Nottingham on 25 September will be a celebration of determination, musicality and vivid virtuosity, as well as an opportunity to hear the inspiring and uplifting story of one of the world’s truly unique artists.  The concert will feature music for the left hand alone from composers as diverse as Liszt, Chopin, Reinicke and Blumenfeld.  The programme will also include a new commission by Nigel Hess.

“A touch of genius”

“McCarthy is a fine pianist and the piano sings with a generous tone.”

“McCarthy was beyond reproach: absolutely brilliant and dazzlingly effective when called for, but in the slower melodic sections and especially in the astounding cadenza his musicianship was of the very highest order.”

“McCarthy offers good, solid, forthright interpretations, especially of the works that appear in their original form. It is an excellent opportunity to celebrate this unusual corner of piano repertoire. But where this CD wins most is in its symbolism: an unlikely candidate for piano stardom overcomes a massive obstacle and fulfils his dream despite everything. That can do more than offer pleasant listening; it can be an example and an inspiration.”

£10 including tea, coffee and cake

Theatre: What’s on in July and August at the Theatre Royal and Royal Concert Hall Nottingham