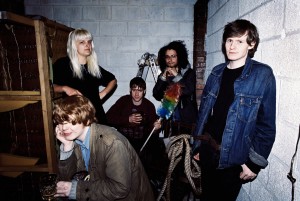 London five piece Evans the Death return with Vanilla, their most ambitious and experimental album to date, eschewing the more traditional pop structures and hooks of their first two albums,

2012’s self-titled debut and 2015’s critically acclaimed Expect Delays. While Expect Delays was a step towards something more collaborative, experimental and abrasive – a bleak, introspective album that still retained a pop sensibility – Vanilla sees the band veer in an ever more adventurous direction: more aggressive, extroverted and raw.

They share the track “Suitcase Jimmy” with it’s no wave party vibe, a semi-improvised portrait of a fictional down-at-heel actor built around a Wilko Johnson-ish guitar part. As guitarist Dan Moss explains: “We owe the title to our friend Carolina – I was hanging out with her by the river one day and we saw this guy just strutting along with his suitcase, and she said “ah, it’s Suitcase Jimmy!” – so we had this character who had this little theme tune. Olly decided he was an aspiring actor who’d just arrived in New York, brimming with ambition. Daniel saw him as more of an ego maniacal, almost Patrick Bateman character, or some sort of spy, and his lyrics were more stream-of-consciousness. I wanted to make him very slightly more sympathetic, so he’s still a total yuppie but he does his recycling, he has some semblance of a conscience, a bit like Aziz Ansari’s character in Master of None. So he became all of those things.”

Named after the undertaker in Dylan Thomas’ radio play, Under Milk Wood, the band was formed by brothers Dan and Olly Moss after meeting singer Katherine Whitaker at a Let’s Wrestle show. After numerous line-ups, the band is now completed by James Burkitt on drums and Daniel Raphael on bass. The new album was recorded at Lightship95 in London with producer Rory Attwell, who worked on both of their previous records. Highly erratic in style and mood, brimming with extreme contrasts, from noisy to funky to melodic, energetic to dejected, full of chaos and restlessness, the album was the result of a carefully planned recording strategy, as Dan Moss explains:

“We deliberately booked very little time in the studio, and we pretty much did everything live, together in the room – there was no trying to fix any mistakes. What you hear is very close to what we did in that moment – so technically, while it isn’t overly polished or slick, it’s a very high fidelity recording – an accurate reproduction of the original source. I think that gives it more of an urgency and honesty than the first two. We decided to limit ourselves to 8 tracks and this meant we were restricted in how much we could alter things after recording, and the amount of overdubs we could do – which is what we wanted.”

Vanilla bounces wildly between styles, lending a real energy and vitality to the flow of the album. A dark, howling, ragged storm of an album, resisting categorisation, Vanilla is anything but – a far cry from the bland, unimaginative music that pervades the airwaves. It is a brittle, brilliant new chapter in the story of a band who never fail to surprise.