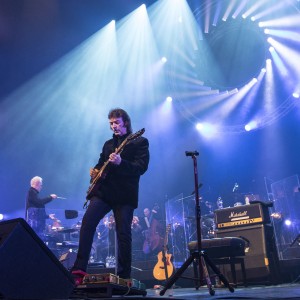 The Nottingham Live Editor knows I’m a big Genesis fan so when she was offered an interview with the band’s former guitarist, Steve Hackett, she kindly asked me if I’d like the chance to put a few questions to him. It was the first time I’d ever interviewed anyone and Steve couldn’t have been more patient and charming. It was a pleasure to speak to him.

NL. So, you kick off with Genesis Revisited Tour at The Royal Concert Hall on October the 1st.You don’t do many dates on this tour. Why Nottingham and what are your memories of playing here?

SH. Well I’ve played in Nottingham several times in the past and I’ve sometimes recorded there. It’ll be my first ever show in England with a live orchestra. I’m looking forward to it. It’ll be a band plus orchestra and you’re quite right, it’ll be the first date of the tour and there’ll be lots of rehearsals going on that day.

NL. Touring with a band and orchestra that size must be very costly. Is that why there’s not so many dates?

SH. Yes, I think so. No one takes an orchestra of that size on the road and expects to make money. We just hope to break even at the end of it. It’s possible to go out with a band and make money but probably not with this size of show.

NL. You’re a big traveller. Do the places you visit influence your music?

SH. Funnily enough it does. Two places I’ve visited in recent times. I’m thinking of Peru. I came back with some instruments from there and it influenced at least one track of the last album. A little stringed instrument called a Charango and a flute called a Quena and as soon as you hear those instruments together you know that it’s the Andes and you know that it’s Peru, at least I do because it’s got that kind of very high sweet sound as if the gravity has all fallen away and we’re up in the mountains as you are so often in Peru. I visited Machu Picchu up in the clouds and had a wonderful sunny day there and we got to befriend Lamas that let you walk up to them and stroke them. It’s idyllic, it’s beautiful, all that influences my music, and then there are other places I’ve been to. I’ve been to Hungary and I’ve visited India for the first time. I’ve been working with an Indian girl called Shema who plays the Sitar. I write things around these instruments and the places I’ve visited, so some of it is an out and out travelogue and a kind of dream document of the places I’ve visited.

NL. George Harrison was influenced a lot by Indian music…..

SH. He was, and for me I think that was the beginning of world music as we know it, the fact that he brought India to London and the British Isles to India was an extraordinary thing, suddenly nowhere was on the periphery, everywhere was equally important. And also the charitable stuff he did for Bangladesh can’t be forgotten. We owe The Beatles and particularly George Harrison a debt for doing what he did to eradicate prejudice.

NL. I know John Lennon was a big fan of Genesis during your era, that must mean a lot to you.

SH. It means an awful lot to me, the fact that in 1973 when we were struggling to get a single date in America, John gave an interview on New York radio and said that “Genesis are one of the bands I’m listening to” It’s not a terribly well known event because in the days before social media things didn’t go viral. Things remained fairly local even back then, even when it came from someone as influential as Lennon.

NL. Can I ask you about Nad Sylvan, does he naturally sound like Peter Gabriel or is this something he works on?

SH. Yes, when I met him I asked him who he was influenced by? He said “I’m a bit of a chameleon” he immediately did an impression of Peter Gabriel and then an impression of Phil Collins, sometimes Phil use to mimic Peter in the early days. Also Nad sings stuff with me that I originally did with Richie Havens, he had an even deeper voice.

NL. He’s got a fantastic range…

SH. Yes, he has got a fantastic range. He’s very unusual to watch, he’s very imposing with a tall blonde Nordic presence.

NL. So will you be playing the classic favourites Suppers Ready, Firth of Fifth, Dancing With The Moonlit Knight?

SH. Yes, all of those will be included in the set. They are classic Genesis numbers, some of the best we came up with.

NL. Will you be playing one of my personal favourites More Fool Me?

SH. Not this time around but down the line it’s possible. It was one of the first that Phil (Collins) actually sang on. But he did take the vocals on a song we co-wrote together back in 1971 called For Absent Friends. But that was one guitar and Phil doing all the voices and harmonies.

NL. I’d love to see Phil perform some of the Genesis songs again but after seeing him play in Nottingham back in November I’m not sure his voice is up to it anymore.

SH. Well you never know what he might do in the future. Never say never.

NL. Why do you think that people still love the Genesis music from the era that you were part of?

SH. I think it’s because it comes from an era when writing was more important than attitude or what you were wearing. I think for the first few years no one had an idea of what we looked like. We weren’t driven by image. Back in the day Peter used to put on that many different costumes and faces that I’m not even sure if people knew what he looked like. I think it’s all down to writing. The strength of the team, the strength of ideas. You couldn’t really get away with a good haircut in those days. It had to be about the music as well.

SH. Well one that’s really still challenging is Dancing with the Moonlit Knight which was the opening track on Selling England by the Pound. And I think that it’s no coincidence that John Lennon picked on us at about that time. It’s an album that’s full of ideas. I guess it’s very British but I think it would be too glib to say that. I think it’s music that goes in it’s own way, and even in it’s first tune (Dancing with the Moonlit Knight) you’ve got the influence of Scottish Plainsong, you’ve got Elgarian stuff so you have that classic influence. The reference to Land of hope and Glory. Then you’ve got jazz fusion. It’s a bit like it’s Mozart on speed, so I really love what that song brings.

SH. I look forward to Suppers Ready every night. The audience that knows it realises that they’re going to be in for about twenty five minutes of continuous music, and I improvise at the end of it to try and wring out every last bit of danger & emotion out of it.

Steve brings the Genesis Revisited Tour and a 41 piece orchestra to Nottingham’s Royal Concert Hall on October 1st. Tickets start at £34.50.
I can’t wait to review it.