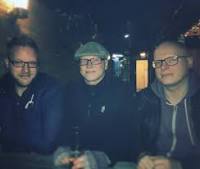 NL: INME back at Rock City what’s it like to be back?

It’s amazing, we played Rock City few years back for Macmillan Fest, just before Sixth, it just feels like the old days. That sounds really old and nostalgic. It’s nice it’s a lovely room I prefer a wide room. it’s nice to play a big room, we play the basement usually. It’s nice to be sharing a stage with A and Wheatus and basically pretend its 2003 again with less hair, haha. Simon left last year after 21 years so we have a new drummer. Tom who is in his 20’s so we have balanced the age again.

NL: Supporting  A along with Wheatus, two bands I wouldn’t have thought you guys would tour with, what’s it like being on the road with these guys?

For me it’s awesome, it’s more the era, I remember when my band were starting to get on MTV and things like that. I remember A and Wheatus being on, the song Nothing being on Kerrang TV and MTV 2 none stop. We started to rehearse in London for about 2 years and for a good 2 months while working on the 2nd album. A were in the room next door so we would all just hang out and they are a lovely bunch of chaps. I’ve kept in touch with some of them since. I think we are the heavier of the three, it’s nice we are on first cause we can say come on guys wake up plus when we finish we can go to merch do what we got to do and load up and just enjoy the evening every night and watch the bands and enjoy the gig. Teenage Dirtbag is a juke box classic, they are really sweet. We tweet about our separate things and Wheatus tweet about it which they don’t need to do that but yeah they just seem really nice. It’s going to be a big party tour less of a heavy show.

NL: What can your fans expect from you on this 9 show tour?

Well we are doing a mix of sing alongs but we are literally recording our 7th album this month and next month and just get on and smash it out. From A they are playing their album Hi-Serious  which is annoying as our fans were asking if we were going to play our first album in full to sort of match up with them  but we have done two tours of that before.

NL: What songs on the set list are most likely to get the crowd pumped?

You know what I need to look at it again, it’s like a think tank, I’m not part of the process but it used to be I’d come up with the set list ,but as I’ve got older I think my superior set list opinion has diminished . We go through the albums and see what’s the best played, what’s the best with the crowd, but we feel the songs that people will want us to play, was 15 when I wrote them, but I’m 36 now. There’s a couple songs we won’t play anymore because we don’t personally get anything out of it like creatively and I think the crowd can see that your faking it abit. Firefly from the first album and Faster The Chase are compulsory. I Believe and something off Herald Moth and Daydream Anonymous  something off our last album The Pride and Trilogy Dawn and this new song which I can’t say which it’s called it’s the next single  to be released.

NL: Alot of people grew up listening to you guys, what reaction have the fans given for this tour?

Really good, the first advert we did all the comments , I can’t keep up with but I don’t really look at that anymore. Its just amazing a lot of people don’t like all three bands but that’s quite cool as they are not familiar with all three bands. Some people like to watch the support and leave before main act, I do that more and more now, not because of any other reason but I sound like I’m getting old now, I’ve partied for a good 20 years of touring and I think its took its toll now and I just wanna get out and go home instead of being out falling asleep on a train and ending up in Clapton  or Colchester or something. I like to stay up late but I like to know my bed is feet away.

NL: What venue are you looking forward to playing at?

They are all bigger, all these London venues change their names, Shephard’s Bush will be great cause it’s a classic venue, Rock City obviously, the Garage which is awesome. Brighton which is Gaz and Toms home town if we are playing Concorde 2 it’s right on the beach  and we get to spend the day having fun and pretending we are rock n roll stars.

NL: Some bands say playing venues like Rock City are great because they are high energy and intermit, what do you like about these kind of venues?

They are great cause they still exist it’s hard for us at moment in music industry and the prices because not a lot of people can afford to go gigs all the time as Monday night gigs etc are struggles. It’s great that the venues still exist, I wish there was more like funding for it I just went to Holland and its incredible cause the government fund the music. After Rock City we just stay in Rock City anyways and go to whatever night clubs on in whatever room, it’s like its own little empire,  just hang out in that area. The Rock City crew, we might as well not even help them they are so good, efficient and quick and just get everything where you want it, which is nice after a four hour drive to have actual genuine hands on deck crew as I’m lazy and the stuff is heavy and I have back problems you know.

NL: Dave I know later in the year you are embarking on your Christmas Melody tour, what’s next for INME?

We are about to announce a tour in January just a small one, a headline tour for the single and just to keep busy. For me personally, I don’t like taking a break, I just need to keep busy for my own sanity. I said to my team just work me like a horse please.

NL: Anything new the fans can expect from the tour?

Tom really, he’s already done a little tour with us but yeah Tom, he’s really rejuvenated the band and the drums he’s recorded for the next album are just mind blowing that’s helped the whole band and Tom used to be in a band with Gaz years ago.

Interview by Martin Dunning for NottinghamLIVE