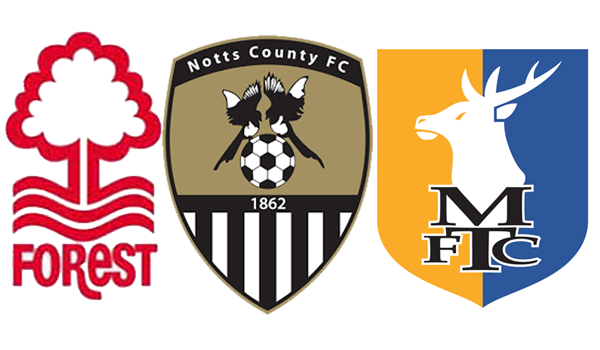 Welcome back to the latest look at the Nottingham football season. Last week I took at the opening games for the county’s three professional league clubs, a mixed bag it has to be said as Forest started with two wins, County with two defeats (though one was a hard-fought penalty shoot out defeat in the cup) and the Stags with a draw and defeat (again the defeat coming in the cup).

This week we saw mixed fortunes again and opening matches in the much-maligned Checkatrade Trophy – more on that later.

Having opened their league campaign with a hard-fought victory over newly promoted Millwall, Forest were looking to keep momentum going as they faced two away matches in the space of three days.  First up was a trip to London to take on Brenford in what turned out to be a thrilling match. The home side took the lead just seven minutes before half-time but Forest struck back minutes later as Andreas Bouchalakis levelled before. With just minutes until half-time Forest then went ahead thanks to Daryl Murphy. Forest started the second half as they finished the first and a second Bouchalakis goal looked to have wrapped the game up just minutes after the break. Brentford were not about to roll-over and set up a tense finish when Andreas Bjelland halved the deficit with just thirteen minutes remaining. As Brentford poured forward in search of an equaliser space opened up at the back and Kieron Dowell took advantage to put the game beyond doubt. Brentford did manage a third in injury time, thanks to Neal Maupay but it was too late to stop Forest making it two wins from two in the league.

So it was Forest headed to Oakwell on Tuesday night to take on Barnsley in a confident mood and looking to keep the run going, sadly things got off to the worst start as Matty Pearson put the home side ahead after just three minutes. Forest though dominated the game and deserved an equaliser, which duly came as Daryl Murphy struck home again shortly before the half hour mark meaning the sides went in all square at the break. Forest continued to dominate proceedings, peppering shots at the Barnsley goal, however it was the home side that took all three points as Ryan Hedges early second half goal was enough to win the match.

While it was disappointing for the Reds to see their winning run come to an end Mark Warburton and his team will surely take heart from the performance that certainly warranted more than it got. Forest face a huge challenge this weekend when recently relegated Middlesbrough come to the City Ground – complete with £15 million former Forest man Brett Asambalonga – but will be keen to bounce back and also send out a message to the rest of the Championship that they’re a force to be reckoned with this season.

Meanwhile over the river at Meadow Lane Notts County were hoping to kick start their League Two campaign after their crushing opening defeat at Coventry but faced another recently relegated side as local rivals Chesterfield came to town. Spirits had been lifted, somewhat, by the mid-week performance at Scunthorpe, but there was still an anxiousness around Meadow Lane, not least when the team sheet was announced which saw almost exactly the same team as had played at Coventry take to the pitch and, most alarmingly, key man Jorge Grant relegated to the bench (Nolan claiming after that this is due to Grant’s fitness). A less than impressive first half did little to lift the anxiousness around Notts fans with the only real moment of note coming when Chesterfields Gozie Ugwa somehow escaped a red card after an off-the-ball incident with Elliott Hewitt. While both sides had chances it was only towards the end of the half that things picked up when the Spireites Scott Wiseman was given his marching orders for bringing down Terry Hawkridge with the referee, perhaps partly looking to amend for his earlier mistake, deeming the challenge to have denied a goal scoring opportunity.

With the man advantage hopes were that County would up the tempo in the second half but it was Kevin Nolan’s first substitution of the game that really made the difference when star man Jorge Grant took to the field. Just minutes later Matt Tootle played a lovely ball into the box and Grant rose to head a curling ball perfectly over the Chesterfield keeper and into the net. County continued to press forward looking for a second goal to wrap things up but it wouldn’t be until five minutes into injury time that said goal would come. Once again it was that man Jorge Grant, the Forest loanee putting away a stunning free kick to ensure a first league win of the season for the Pies.

Tuesday night saw County back at Meadow Lane, though in front of a significantly smaller crowd as they looked to kick off their Checkatrade Trophy campaign with a win. The tournament has been widely derided and criticised by fans due, in the most part, to the addition of Premiership U21 sides in the tournament – with some fans taking issue with Alan Hardy’s decision to vote in favour of this format despite a fan poll showing supporters were dead against it. Everton U21’s were the visitors to Meadow Lane for the first match, but with many fans choosing to boycott the tournament there was just under 1,500 to see them (even with tickets available for as little as a fiver). Despite the off-field feelings (and, from a personal point of view, I’m dead against the tournament) for the players it was all about a win and keeping momentum. Manager Nolan, keen for a good run, made several changes to the starting line up from Saturday with Branisalav Pindroch, making his debut in goal, becoming the first Serbian to play for County. Two first half goals from Haydn Hollis and Jonathon Forte were enough to ensure County started the tournament with a win, despite a second half strike from Anton Donkor, and, more importantly, the £20,000 for a win. Plus boss Nolan has already hinted that he may be interested in bringing someone from the young Everton side to Meadow Lane on loan. With further group matches to come against rivals Mansfield, at home, and Lincoln City, away, it will be interesting to see if interest in this maligned tournament grows among the County fan base.

All in all a good week for County who put the opening day blues behind them with a big win over Chesterfield, though the performance still has some fans feeling cautious and the need for a pacey striker seems clear – can Forte fill the role? This weekend it’s a trip to Wycombe, and a face to face with man-mountain Ade Akinfenwa, as the Pies look for their first away win of the season.

Unlike County and Forest who played twice this week there was just the one game for Mansfield Town as they marked their first home league game of the season with a victory over newly promoted Forest Green. Well funded by “green energy” industrialist Dale Vince, Forest Green have made headlines ahead of their first season in the football league due to the fact the club runs a fully vegan setup (they also made the news amidst a messy transfer battle with County over former Notts man, and Forest Green skipper, Liam Noble). On the field though it’s all about points and it was the Stags who took them on Saturday as two goals in six second half minutes were enough for the win. Striker Danny Rose rose above everyone to head in Will Atkinson’s cross on fifty one minutes to give Town the lead before winger Paul Anderson slotted home minutes later to give Mansfield their first win of the season.

Next up it’s a trip to Accrington Stanley (who are they?) for Steve Evans and his side who remain the only one of the three Nottinghamshire clubs to remain unbeaten in the league (though Forest have, of course, played a game more than either County of Mansfield).

All in all it’s been a reasonable start for all three sides, though I’m sure they’d have all liked to have done slightly better, now though it’s about trying to get a run together with all three clubs hoping to be making challenges towards the top end of their respective tables come May.

Join us next week for the latest update and don’t forget to get in touch to let us know your thoughts on how your side is doing, and if you fancy writing for this column please get in touch.

You can find us on Twitter @NottinghamLIVE so drop us a message with the hashtag #Forest #Pies #Stags depending on which club you’re discussing, you can also email me at darren@nottinghamlive.co.uk

Note: We’re also looking for writers for other local sports including Notts Cricket Club, the Panthers and the Nottingham Rugby Club. If you fancy writing about any of these please get in touch.