NottinghamLIVE Editor Darren Patterson dusts off his old Editors Blog giving it a new breath of life, expect occasional ramblings about Nottingham happenings and what’s going on with NottinghamLIVE. To kick things off he gives his thoughts on Sunday’s Hockley Hustle event. 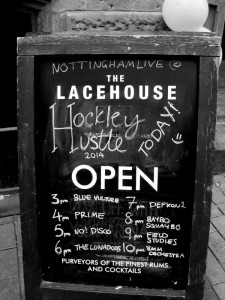 From the moment we were asked if we wanted to run a stage at the returning Hockley Hustle this Sunday had been the day of reckoning, the cause of excitement, nerves, stress and constant email exchanges.

There is no doubting that the last couple of weeks were one heck of a challenge, hell there were even moments when I wondered if we would even be able to pull the thing off as we struggled around for kit. When with a week to go we still didn’t even have a sound tech the worries were really starting to grow.

But then it’s all those stresses and challenges that make things just that little bit more delicious when it all comes off.

And boy did it.

It’s safe to say that the day didn’t go without a hitch as sound issues effected us at certain parts, however all in all we had a fantastic day, sure we ran about half hour behind but hey isn’t that the festival way and it seemed that running late didn’t bother anyone else as with the place packed for 8mm Orchestra’s headline set. Though sadly we had to cut things a little short for the band due to laws over the drums.

As I have said already the build up to the day was not without it’s problems but, thanks largely to the stellar work of Cassia on the Saturday, as well as Tommy and Will, who were a great help even though we must have been only one of dozens still harrassing them, we were looking in good shape to go.

Anxious to avoid any problems I decided to arrive in town around lunchtime despite not being due at the venue until half one, this gave me time to check out Lace Market Square and have a chat with a few other organisers, such as Kris Davis from IKE Productions and Jason Loftus who’s Double Impact stage (moved from LMS to Pilot) was already up and running. After a wander round town and a quick hello to Joe at The Lacehouse I decided I had time to chill for a bit. 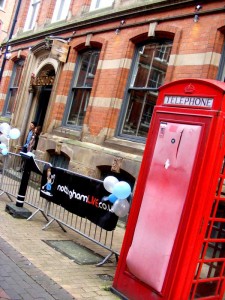 I was wrong. I’d literally just purchased a drink, soft of course, at Pilot when my phone rang, my dad had pulled up outside The Lacehouse with the PA system we’d borrowed. A big thanks to Mike Brooks (buy his book when it comes out next year) for allowing us to borrow it – and to my dad and brother for transporting it around for me. Shortly after our sound tech, Angelo arrived and began what would turn out to be a rather testing day for him.

There were a few early glitches but it was only fifteen minutes after the scheduled start time that our first band, Blue Vulture, took to the stage and what’s more we had a pretty good crowd to watch them – my concern that we’d have no one in proved to be fairly quickly dismissed.

BLUE VULTURE were in fine form kicking things off and, thanks to the half hour changeover time, we were back on schedule when Prime took to the stage next for another enjoyable set that also went down a storm.

I’ll be honest, I was finally starting to enjoy myself and believe all was good. I should have known better. It was during third act NO!DISCO’s set that the first sign of sound issues cropped up. The bands extra vocals causing problems which Angelo battled vainly against throughout. Thankfully, despite the issues the crowd seemed to enjoy the set.

I however, was starting to panic, speaking to Angelo it appeared that the system was struggling with the louder bands and vocals, considering the bands coming up later on the bill this was set to be a heck of a problem.

Fortunately Angelo was on it and he managed to get things working and all seemed to run reasonably well through extremely enjoyable sets from THE LUNADOGS and DEFKON1. 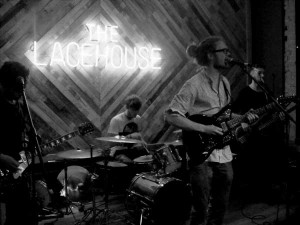 BAYBO SQUAYBO were due up next and it’s here that the technical issues started again leaving a real concern over whether we’d get things sorted, eventually the band played and, though the crowd seemed to enjoy the set, there was definitely sound issues.

During the set Cassia made the decision to try and source a new PA to see if that helped matters, after a few calls and some running around she managed to get hold of one from across the road and it was hooked up to the existing set up to enhance the sound – which was needed because FIELD STUDIES certainly pushed it to the max through their set.

The crowd were packing in now with Field Studies proving one heck of a draw and the atmosphere was buzzing despite the fact we were running a good half hour behind.

The delay didn’t seem to dampen the mood and maybe even helped as other venues ended because by the time 8MM ORCHESTRA took to the stage, 35 minutes behind schedule, the place was packed solid (including the Notts TV team). 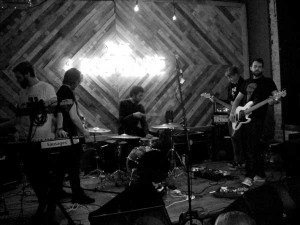 Sadly, due to laws regarding noise 8mm’s set was cut a little short but that didn’t seem to bother the crowd who gave them a brilliant reception.

So thus the day was over, other than the packing away (during which I managed to get myself locked in the secure room downstairs – proving it’s very secure).

All in all this proved to be a fantastic day well worth the work in the build up and the anxious sleepless nights preceding it.

Being part of the Hockley Hustle is, without doubt, one of my proudest moments in the five years I’ve been doing NottinghamLIVE and the fact that our stage went down so well made it even more so.

A massive well done has to go out to the team who worked so hard to put the whole thing together, something they’ve been working on since before last Christmas, people like Will Robinson & Pat Cannon at I’m Not From London, Kris Davis at IKE, Jared Wilson and Ash Dilks at Left Lion and many others, including, of course, HH founder Adam Pickering. Considering how stressful one stage was I don’t know how you guys managed to co-ordinate 40!

Also to the folks at The Lacehouse, Sach, Joe and the team, who were extremely helpful on the day, allowed us use of their storage room and didn’t get too annoyed when we slipped slightly over the eleven o’clock finish. We hope you guys enjoyed the day as much as we did.

To the bands who played, and also lent us kit – along with all others who lent kit -all the sets were great and you guys were all understanding and helpful around any issues, and of course thanks to Bainy who pulled double duty both playing (in opening act Blue Vulture) and acting as Master of Ceremonies.

A massive thanks to Angelo, without who the sound issues would have drowned us, he battled against numerous stresses to ensure that a great day was had by all and of course a HUGE HUGE thanks to my colleague, friend and NottinghamLIVE Music Editor Cassia Helme, without Cassia none of this would have happened and a huge amount of credit for the success of the day lies firmly on her shoulders.

And of course a MASSIVE thank you to EVERY single person that made a visit to our stage – or indeed attended the Hustle itself – you guys were truly, utterly fantastic.

Finally on a personal note thanks to Mrs NottinghamLIVE, Geri, who’s had to handle my nerves and stresses as the day approached and made sure I didn’t completely fall a part.

All that thanking might seem somewhat sycophantic but the simple fact is that, much like the whole event itself, the NottinghamLIVE stage succeeded thanks to the team work of all involved and without everyone’s support and hard work Sunday would never have been the amazing day it was.

All in all it was a fantastic day for Nottingham.

I can’t wait till next year.