Prime are a new Nottingham based band that have stood out with their live performances in the Midlands over the last 6 months, but their lead singer Lee Heir is certainly not a flash in the pan, having been a part of the once fertile Nottingham music print scene (me with Night Flight magazine; Saggy Pants; Sandman; amongst other magazines/fanzines, some of which he contributed) and the growing live acoustic community (with a very creative night at The Chameleon, brilliantly titled ‘Shut The F**k Up’ and presented by Prime bassist Chris Munton, also a talented singer-songwriter in his own right); and running the video and music company The Public House Brand, producing videos for the sadly just split indie/alternative band Flaming Fields and Prime’s own ‘Teen TV’ video.

He has never strayed from his original idea of a fun but credible home-grown mod and punk influenced outfit however – possible believe it or not, even in today’s pompous environment of post-Coldplay dross – and Prime’s ‘Before The After’ mini-album, 8 tracks of fiery rock ‘n’ roll on this new CD version, clocking in at around 35 minutes, has confirmed that intent. 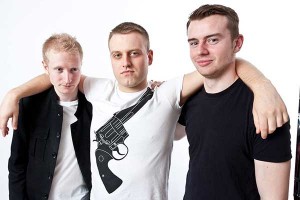 Opener ‘Flatline’ is a lyrical barrage against living a life of banality, regret and emptiness: “Too many people need the drugs and the wine / Ask ‘em once they don’t want to be alive” and mixes up ska, hard-rock and album producer Tiago ‘Hypermonosonic’ Queiroz’s cool garage-rock guitars effortlessly. It’s one of the most creative tracks on the CD, and a powerful opener. Next up is ‘Silly Billy’ and ‘Like The Weather’ which, although they go down well as catchy tracks live, don’t reach the level of the other songs to come. With the feel of the heady days of 90’s power guitar rock, and while not up my street (I never was a fan of T Rex and Oasis), have some telling, moody, and on this occasion, explicit lyrics on ‘Silly Billy': “She got a little brother and he’s a dunce / She got an old granddad but he’s a c**t”). ‘Like The Weather’ drifts into heartbroken rock ballad territory over a big guitar chorus.

‘Same Old Story’ continues the first-half’s downbeat feel over psychedelic keyboard washes and Munton’s uncouth bass-line. “It’s the same f**king thing man, every time / Take what you want because I don’t mind” rants Heir over a short, crunching tune.  New Prime guitarist Ollie Barnes has recently taken the riffs into a more reggae/ska realm at the band’s latest gigs, which – along with ‘Flatline’ – hint at the next direction for the group. The current direction however, is blistering, catchy rock, and there’s no better example than ‘Teen TV’.

‘Teen TV’ takes The Clash’s ‘Career Opportunities’ riff and dumps it on it’s head in a two-and-a-half minute barrage. Lee Heir recently commented in a Nottingham Live interview that the song mocks ”TV stations and record companies that apparently rule the roost” and joked that he was a fan of “throwaway crap”. This track shows that sense of humour and directness, highlighted by it’s well-produced video on youtube and choice as first online single.

‘Take Me To Your Crew’ mixes ska and hurtling punk rock, nonsense rhymes and “dizzy whores” (stolen from a Morrissey line). The “Show me something new / Nobody here understands a single thing I do” line could almost be a commentary about the current music scene and Prime’s place amongst it. In my opinion, the instrumental section at the end of the track is one of the tightest and interesting parts of the mini-album, with Dan Ryland’s drumming terrific.

‘Nothing But The Beat’ has a tough, fast, funk feel, and ‘the beat’ keeps the spirit alive during disillusioned moments of “People like them / Getting me down” with another bombastic chorus and prominent backing vocals. Chris Munton’s bassline drives it along nicely, and helps enforce the positivity of the words. ‘Du What You Du’ is the official album closer, a crunchy, straight up rock number, and ends ‘Before The After’ on a high note, with some frantic solos and a call-to-arms feel as Lee sings “Someone’s gonna buy all the things that you sell / Because you do what you do, and you do it so well”. And anyone who thinks otherwise, “It’s their loss”. 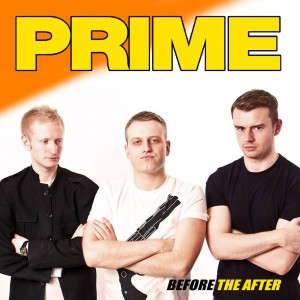 Prime are a band that can only grow stronger in 2015 with bigger and better gigs, and ‘Before The After’ hints at their creativity and potential: a very enjoyable piece of music.

* Bonus tracks on this 11 track Import CD version with lyrics and photos (available on amazon internationally, i tunes and bandcamp): ‘White Boys, White Noise’, a scratchy funk workout with some OTT wordplay about soccer ; ‘Silly Billy’ (faster instrumental version) ; and ‘Bouncing Babies’, a rocky, powerful and even darker cover of the 80’s band The Teardrop Explodes’ song.