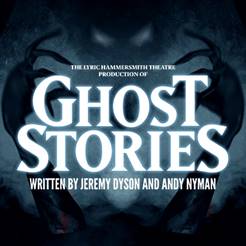 Professor Goodman will visit the Theatre Royal Nottingham to confirm the supernatural is PURELY a trick of the mind… or is it?

Jeremy Dyson and Andy Nyman’s supernatural spectacular, Ghost Stories, begins it’s first ever regional tour in early 2020 on completion of its West End run at The Ambassadors Theatre, London, which transferred following a smash-hit, extended run at the Lyric Hammersmith Theatre.  More spine-tingling and terrifying than ever, the Olivier Award-nominated show will visit the Theatre Royal Nottingham from Tuesday 21 to Saturday 25 January 2020.

There’s something dark lurking in the theatre. Enter a nightmarish world, full of thrilling twists and turns, where all your deepest fears and most disturbing thoughts are imagined live on stage. A fully sensory and electrifying encounter, Ghost Stories is the ultimate twisted love-letter to horror, a supernatural edge-of-your-seat theatrical experience like no other.

Please be advised that Ghost Stories contains moments of extreme shock and tension. The show is unsuitable for anyone under the age of 15. We strongly advise those of a nervous disposition to think very seriously before attending.

Andy Nyman is an award-winning actor, director and writer who has earned acclaim from both critics and audiences for his work in theatre, film and television. On stage Andy is currently playing the iconic role of Tevye in Trevor Nunn’s revival of Fiddler on the Roof. It is playing at the Playhouse Theatre until November 2nd. Andy was also seen in Martin McDonagh’s Hangmen (Wyndham’s Theatre), Stephen Sondheim’s Assassins (Menier Chocolate Factory) and Abigail’s Party (also Wyndham’s Theatre). Other theatre work includes the original production of Ghost Stories (Lyric/Duke of York’s Theatre) which has recently been made into a major motion picture, also written, starred and directed by Andy & Jeremy Dyson. Other film credits include The Commuter, Death at a Funeral and Kick-Ass 2. His upcoming films include playing opposite The Rock & Emily Blunt in Disney’s Jungle Cruise plus starring opposite Renee Zellweger in Judy. TV he is best known for Peaky Blinders, Campus & Dead Set, and has recently appeared in BBC 1’s Wanderlust.

Jeremy Dyson is a screenwriter, stage-writer and author, best known as a member of comedy group The League of Gentlemen. With Andy Nyman he co-wrote and co-directed the stage and film versions of Ghost Stories. In addition he co-created and co-wrote the BAFTA-nominated comedy-drama series Funland and co-created, co-wrote and directed the Rose d’Or-winning all-female comedy show Psychobitches.  His second collection of stories, ‘The Cranes that Build the Cranes‘ won the Edge Hill Award for short fiction.