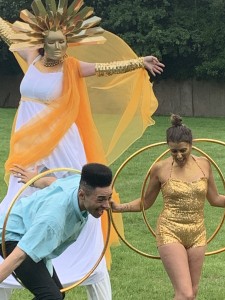 The stage is (almost) set for the Midlands largest music festival, Splendour, when I get an exclusive behind the scenes tour ahead of the big day tomorrow (July 20)

Unless you’ve ever got there for the 11.30 start (or maybe woken up worse for wear in the park) chances are you won’t have seen the performance areas so empty.

As we walk through the court yard and to the side of the great Hall there is a buzz of activity as attractions, sound equipment and food stalls are being assembled. 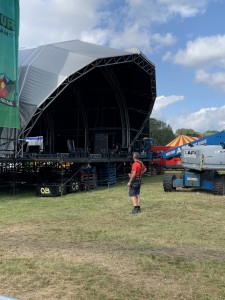 Unmissable in the distance is the imposing main stage where headliners Manic Street Preachers, The Specials and Rag n’ Bone man will play.

As we arrive on very important fixture is being delivered – the toilet- somewhere we’re told that even the largest names in the business have made a dash for just prior to there big moment on stage. 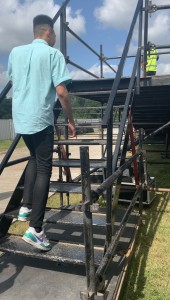 One of those performers this year, fresh from playing Glastonbury, is Nottingham’s own Rob Green.  No stranger to the festival Rob has played many of the stages, stepping in at the last minute as the headlighner on the acoustic stage after the actual performer dropped out. This year will be his first time on the main stage and he has the honour of walking us up the very same steps which will be graced by the big acts this year. 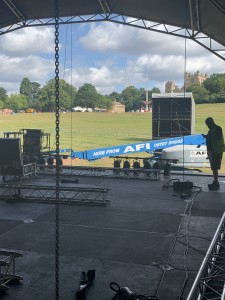 And what a stage it is, huge in size at 15.6 meters wide, the final touches are still being added in readiness for the acts who, with a view of the Hall in the distance, will play to a sell out audience of up to 30,000 revellers.

Just to give you some idea of size, it is known in the trade as The Orbit stage, originally designed by George Wemyss  during the Cold War for use as an aircraft hangar and storage facilities for the military. 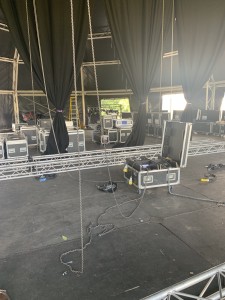 We are able to walk about the whole stage briefly of which only about a third of the audience will see as most of it is actually behind the curtain backstage. 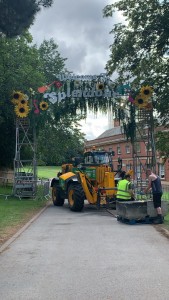 Tickets will not be available on the door. The advance purchase of drinks token is no longer available.