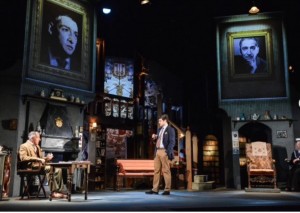 The latest offering from Nottingham Playhouse is Sleuth, described as a witty tale of revenge, I therefore had high hopes for this play; as well as the fact it is has been performed over 2000 times on both Broadway and West End.

It may only have two characters, Milo and Andrew, but you didn’t feel shortchanged as the dialogue came thick and fast, so much so that in first half I was a quite bewildered.

The set was rather magnificent, with many moving parts and visual display screens that were ever changing and were controlled by the characters as part of the play.

Milo was played by the old Martin Fowler, James Alexandrou, who did a surprisingly good job, he acted drunk very well.

If you prefer your plays full of games, old fashioned and nonsensical then Sleuth is for you. Showing at the Nottingham Playhouse until 24th September.