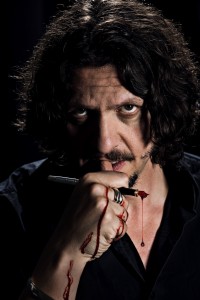 How do you review a reviewer? This was a concern that crossed my mind before going to see Jay Rayner’s  ‘A Night Of Food And Agony’

More concerning was the fact that someone said to me “Oh, now he knows you’re reviewing, he’ll pick on you knowing Jay” Cue mild panic and an afternoon spent trying to think up witty one liners in reply to a renowned restaurant critic labelled ‘acid tongued’  What do you think to the show? “Oh it’s far better than I was expecting” Cue imaginary hysterical laughter.
I needn’t have worried, rather than scathing criticism, Jay came across as quite charming. So ‘knowing Jay’ was really a misconstrued assumption. Do we really know Jay? Well for a start, let’s get things straight, he’s not Marco Pierre White. Marco/Jay, Marco/Jay.  Jay begins by putting this particular bug bear to bed before delighting the Nottingham audience with anecdotes about his time as a restaurant critic, and by the end you feel like he’s an old friend. He has plenty of stories to tell, having written for the Observer for over 15 years, the award-winning (OK, one of those was for his beard) writer, journalist and broadcaster is no stranger to bad food and worse service. Not all his reviews are about a bad restaurant, but Jay rightly knows that we all love a bad review, and he has plenty of experience of those to share.
From menus which use more poetic license than, well, someone with a poetry license to interesting decor, food fads and dining concepts, the first half of the show was a whistle-stop tour of Jay’s world and culinary experiences. Closing the first half with a question and answer session the self-confessed ‘food slut’ took questions from the audience. The intimate setting of the Playhouse working perfectly for such a gig. “What’s your favourite food?” asked one chap “That’s like asking a hooker what her favourite position is” quips Jay
The second half of the evening brings Jay together with his ensemble of top flight musicians, including the sultry tones of wife Pat Gordon-Smith. Jay openly admits to not being the best pianist, but definitely the best food critic to play a piano.  Together the assembled band play tunes from the Great American food and drink songbook interspersed with further witty stories, including growing up with a famous mother, that being Clare Rayner, the sex columnist.
Whilst the Playhouse is a great size venue for audience participation, for me, I just found it slightly leaning uncomfortably on the large side for Jazz. Personally I like to take my Jazz neat, in dark cellar below a pub somewhere, drinking something intoxicating, extremely irresponsibly, but that’s just me. You couldn’t fault the actual performance.
Overall an unmissable evening out. I for one could have listened to his stories all night. Please Sir – Can I have some more?
The tour continues into May. For further dates visit www.jayrayner.co.uk
By Tanya Raybould
Editor
@tanyalouiseray
Share this content....