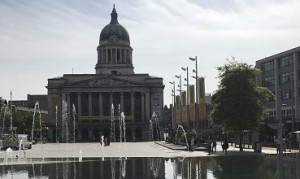 Research released today has revealed the UK’s best quality locations for charity shopping, with Nottingham beating the likes of London to be named the nation’s best- as secondhand shopping soars in popularity during and after the national lockdown.

Already favoured as a more sustainable and budget-friendly choice by Oxfam’s Second Hand September campaign this month, charity shopping has boomed during the pandemic even when shops were shut- with a 185% increase in online sales, and the likes of the British Heart Foundation reporting its busiest day on record when shops reopened.

Nottingham has topped the rankings with almost 100 charity shops within the centre, and boasting bohemian hotspot Hockley as a popular secondhand destination. The newly-dubbed Charity Shop Capital of the UK is top for fashion-lovers as it includes six White Rose stores, which sell designer brands at bargain prices in the city centre and beyond. Other charity shop meccas include Market Street and Mansfield Road, as well as Goose Gate which features a beloved Sue Ryder Vintage & Retro.

North London has been pipped to the post, coming in a close second and beating it’s neighbouring London areas for the best charity shops in the capital.  As the wealthiest area, it’s not surprising that its reputation for designer goodies makes it a destination for bargains- including a record number of boutique charity shops including the likes of Boutique by Shelter in West Coal Drops, Age UK Boutique in Camden, and Mary’s Living & Giving in Stoke Newington.

Coastal resort Bournemouth completes the top 3, with the most number of charity shops per person in the top 10. Winton High Street is bursting with charity destinations, and the town even features The Treehouse: a children’s charity shop adorned as an enchanted forest.

Sitting just outside of the top three and with the highest average Google rating for its charity shops, Derby comes in fourth, closely followed by Edinburgh in fifth place as the only Scottish destination to make the top 20. Also making the top 10 are Norwich, Portsmouth, Poole, Oxford and Bristol. Trendy Brighton and major city Manchester sit at number 14 and 18 respectively.

“Charity shopping has always been popular for those looking to save money, be more sustainable and find something unique; it’s no surprise that charity shops have become even more popular with younger people and students who are cash-strapped and looking for an ethical way to enjoy fashion and homeware trends.

With charity shops surging in popularity again as the highstreet reopens after lockdown, and students return to term time, many will be looking to find the best destinations for a secondhand haul- but it’s not always easy to know where to start. Our ranking has done the hard work for thrifters, to find out which destinations are worth a trip to find the best quality and value in donated items during Secondhand September and beyond.”

Read more about the ranking and the top 20 here.