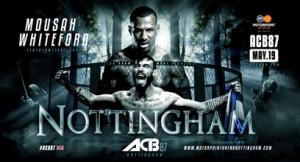 Europe’s #1 MMA promotion ACB returns to the UK on May 19th at the Motorpoint Arena in Nottingham. Manchester’s own Kane Mousah will be battling Scotland’s Robert Whiteford in a mouth-watering featherweight main event.

ACB 87 is the first major mixed martial arts show to head to Nottingham since September 2012. It marks the fifth time that the MMA supremos have descended upon the UK.

Kane Mousah returns to the ACB cage for the third time looking to retain his perfect record in the promotion, after previously defeating both Lewis Monarch and most recently Alex Enlund at ACB 70 last September. However, this will be the Mancunian’s first bout at featherweight and in usual Mousah form, he has not taken an easy opponent to test these waters.

Robert Whiteford also makes his third appearance under the ACB banner, after headlining ACB 47 in Glasgow with a decision victory over Kevin Petshi. Whiteford went on to submit UFC veteran Nam Phan in devastating fashion after just twenty-one seconds at ACB 54 in Manchester.

Mousah said “This is the fight I have wanted for a long time. I’m going to show the world just how much of a savage I am. I promise Robert Whiteford that he’s going to have a nightmare on his hands trying to deal with me”

The battle between Mousah and Whiteford will headline a stacked fight card, featuring the best in domestic and international mixed martial artists. With more big announcements coming this week, ACB Nottingham is set to be an incredible night of fights.

English middleweight standout Scott Askham returns to the ACB cage to face tough Russian striker Ibragim Chuzhigaev in the co-main event at ACB 87. Askham returns to ACB after successfully defeating Polish favourite Michal Materla with a first-round knockout earlier this year. He was also victorious in the main event of ACB 70, when he defeated British rival Luke Barnatt in front of a partisan crowd in Sheffield.

His opponent, Ibragim Chuzhigaev is no stranger to fighting on British soil. The Berkut Fight Club middleweight has been victorious in all three of his fights in the UK, stopping each opponent inside the distance. He was victorious over Will Noland as chief support to Askham at ACB 70.

Askham said “Every fight is a test for myself, but I feel that I have momentum on my side. I like to be the underdog, it sets a fire inside me and makes me want to prove everyone wrong! I believe I am one of the best strikers in the world and I’m on a mission to prove that”

Tickets can be booked online  at https://www.motorpointarenanottingham.com/online/ACB-MMA or via telephone
on 0843 373 3000 or in person at the Motorpoint Arena Box Office, Bolero Square, The Lace Market, Nottingham, NG1 1LA.