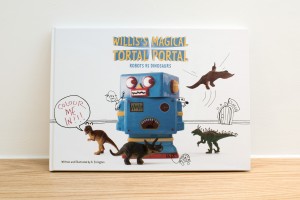 BREAKING: 3 YEAR – OLD SAVES THE WORLD
It is the year two thousand and something, and three year old Willis is saving dinosaurs from an asteroid in prehistoric Beeston and fighting robots on Mapperley Top.
These are just two of the adventures faced by our hero and his magical tortal portal in a new children’s story and colouring book from Nottingham author Kimberley Errington.
As weird as it sounds, the story is based on true events. Kimberley’s friends threw a themed robots v dinosaurs party for their son Willis. Roped into making decorations and costumes, the party became the inspiration behind the book which sees the character visit other Notts areas,  with West Bridgford and Mansfield Road both getting in on the action. 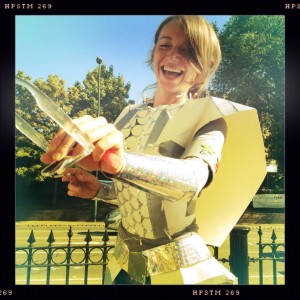 From a fashion background at Nottingham Trent University, Kimberley tired of what she describes as “the soulessness of the industry”  After graduating, she went on to do a Masters degree but after its completion, she began work as a support worker in women’s services. Delivering creative workshops, she noticed the positive effect on the ladies recovery and general well being.
This realisation saw Kimberley decide to bring the creative and caring aspects of each side together, setting up Make to Make, a social enterprise which is now in it’s third year, with any profits going back into the company.
Make to Make will be launching Willis’s Magicial Tortal Portal at Nottingham’s Rough Trade on Friday 28th April, along with a number of other books, including  97 Ideas About Creativity a book of ideas and illustrations about the ‘logic’, relationships and ‘anatomy’ of creativity, by Jim Shorthouse and Kimberley “He does the clever writing bits and I do the doodles.” says Kimberley.
The Notts author has plenty more ideas in the pipeline too:
“I’m working on a set on language books for children with my good friend Magda who is Czech. She wants her boys to be bilingual for when they visit the motherland.”
An idea she hopes could be expanded into other languages. Also The Wolf of Colwick Woods…a story about a lone wolf, orphaned at birth raised by woodland creatures and a naughty herd of sheep led by an Evil farmer who get up to all sorts. This story sheds some truth on peoples misconceptions of wolves…they don’t all huff and puff and gobble old ladies.
Another, is Maymay and the Trogure of Trent Bridge…what happens when a Troll and an Ogure fall in love and have babies, its not pretty.
Another idea about Bella The Brave and Witch of Whittier Road….I’m just formulating this one still, but the Sneinton Dragon crops up for sure!
“But I don’t have a real magic Tortal Portal to freeze time, so I’ll have to see what gets done as and when!”
On the launch night the book will cost £16, limited number of about 20 at this price
After that you can order online from Amazon or Epubli for £18
By Tanya Louise Raybould
Editor
@tanyalouise_