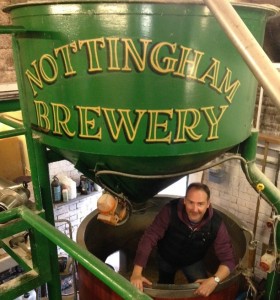 THE NUMBER of UK breweries is at a record high, with the total number increasing eight per cent in the last year alone, according to research from Nottingham-based accountancy group UHY Hacker Young.

James Simmonds is a partner at the firm and chair of its national brewing, distilling and wine production sector group and believes Nottingham’s craft beer sector is thriving thanks to increased demand for artisan products in the city. Ahead of this week’s Nottingham Robin Hood Beer Festival, James reflects on why the craft beer market is still ripe for growth.

He said: “Craft beer is leading the way in the surging popularity of artisan products and has pushed aside other brands in high street bars. Many are now firmly established household names and in Nottingham there are many examples of this, with micro-breweries, micro-pubs and craft beer outlets steadily becoming part of our high street, such as: Purecraft Bar, Castle Rock, Scribblers Ales, Blue Monkey, Magpie Brewery, The Barrel Drop and our client Nottingham Brewery to name a few. We have worked with Nottingham Brewery for over 15 years and in that time we have seen the business grow steadily thanks to an increased interest in real ale and craft beer and a change in attitude towards the sector – which is really exciting.

“This increasing popularity has transformed many microbreweries into highly profitable businesses for entrepreneurs looking for a niche position in the food and drinks market. I believe beer has become far more fashionable over the past decade, moving away from a culture of binge drinking and instead becoming a well-informed hobby which is open to anyone. As a result of their success, microbreweries across the UK have also become attractive acquisition targets for larger breweries – meaning the market is sure to continue booming for the foreseeable future.”

“The success of breweries both locally and nationally is almost certainly thanks to the progressive beer duty introduced by the government back in 2002 –  which allowed small local brewers to receive a low level of duty on anything under 60,000 hectolitres. This threshold is bittersweet for the sector, as while it has encouraged hobby brewers to make a business from their passion, it deters them from producing large amounts of their products, as they would then be working at a cash flow disadvantage as the higher beer duty kicks in.

“Alongside beer duty thresholds, another concern for the industry is the lack of outlets available in cities. Micro-pubs often struggle with perceptions in the community, with councils often perceiving them to adopt the same culture as traditional pubs and refusing licencing– which is a real shame. When I have visited micro-pubs in Nottingham, such as A Room with A Brew on Derby Road and The Barrel Drop in Hurts Yard, the atmosphere is unlike that of a city centre pub, with many of their customers looking to enjoy, savour and socialise through their craft beer passion while supporting local brewers and businesses.

“With this in mind I think it is fantastic that Nottingham hosts a number of beer, food and drink festivals throughout the year – as they prove how accessible the sector is and showcase the skilled individuals locally who create these artisan products.

Food: Microbreweries on the rise – Just in time for City Beer Festival

Food: Hail to the ale at No/6 bar, Nottingham