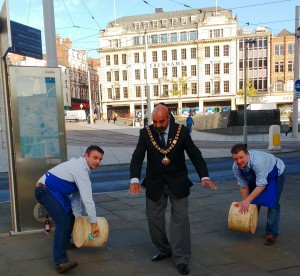 The owners of The Cheese Shop in Nottingham’s Flying Horse Walk along with The Lord Major of Nottingham,Cllr Mohammed Saghir, retraced the steps of those involved in the Nottingham Great Cheese Riot of 1766 to mark its 250th anniversary.

The Riot happened during Goose Fair when stalls were attacked and ransacked by people in reaction to the prices being charged, and cheeses distributed to the crowd. As they were barrel-shaped they could easily be rolled, and soon they were being propelled down Wheeler Gate and Peck Lane. The mayor, trying desperately to intervene, stood in the middle of Peck Lane, only to be knocked over by an accelerating cheese.

“Cheese is still very important to the people of Nottingham, forming a key part of their diet, and we are fortunate that nowadays it is affordable and there is a great range of local, national and international cheeses to choose from,” said Webb and Rob Freckingham, proprietors of The Cheese Shop.  “Thankfully it is a very different scenario to 1766.”