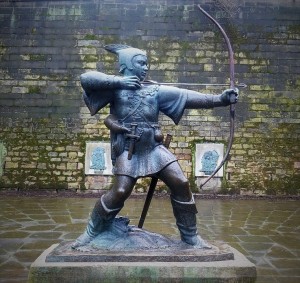 A panel of local experts have come together to discuss who they think gave the best and worst portrayal of Nottingham’s most famous outlaw, ahead of the release of the new Robin Hood blockbuster in November.

With so many dedicated films and TV series over the years, not-for-profit electricity and gas company Robin Hood Energy decided to settle the debate once and for all by gathering the opinions of local experts, including: Ade Andrews, founder of entertainment and tour company Ezekial Bone, Adam Greenwood, owner of The Robin Hood Experience, Bob White, chairman of the World Wide Robin Hood Society, Tony Rotherham, a Robin Hood historian and Chris Hickman, communications manager at Marketing NG. Robin Hood Energy’s marketing manager, Simon Rhodes, also joined the discussion.

Sean Connery’s performance in the 1976 film, Robin and Marian, was named as the best depiction of the Sherwood Forest legend, followed by Errol Flynn’s portrayal of the local hero in The Adventures of Robin Hood (1938).

Tony Rotherham said: “It has to be Sean Connery in Robin and Marian. As well as the first class costumes, he was the right age, a bit of a trouble-maker and a bit arrogant too, just like he was in the early stories! He plays Robin Hood very well.”

Bob White added: “Errol Flynn’s classic performance set the benchmark for a Robin Hood who typically embraced the action, adventure and romance of the Sherwood Forest hero but Sean Connery’s portrayal of the ageing outlaw in Robin and Marian has a greater sense of realism.”

When asked who they thought gave the worst representation of the highly skilled archer, the majority of panellists agreed on Russell Crowe in the 2010 movie. One vote went to Al Hedison, in the 1959 film The Son of Robin Hood, and another went to Robin Dunne in Robin Hood Beyond Sherwood Forest (2009).
“Sadly, I have to say Russell Crowe,” said Adam Greenwood. “I say ‘sadly’ as there is a lot to love about this movie but Russell, while a very competent actor and action hero, simply does not embody the spirit of Robin Hood.

“He is not helped by the fact that, despite being written specifically for him, the script portrays Robin as a much younger man, little more than 20. This just makes the whole movie a little strange and jarring.”

The new movie, produced by Leonardo DiCaprio, features stars including Taron Egerton (as Robin Hood), Jamie Foxx, Jamie Dornan and Ben Mendelsohn. The trailer has already generated a lot of opinion among Nottingham folk, including the panellists.

The experts also had mixed opinions on whether Taron Egerton could make the best Robin Hood to date, but all agreed the new blockbuster would be a success – whether it’s good or not.

Tony Rotherham said: “It will be a success – they always are no matter how good or bad they are, even the Russell Crowe one was because it had a good actor in it.”

You can read the full interviews with the panellists here: https://robinhoodenergy.co.uk/news/best-robin-hoods-film-experts-decide/