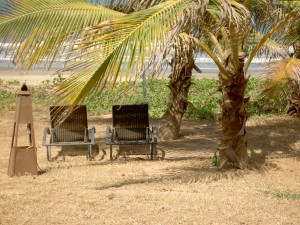 With holiday season still upon us, trips to foreign shores are often an excellent opportunity to try new cuisines. NottinghamLIVE Editor TANYA RAYBOULD blogs about when both the food and WiFi isn’t always what you were expecting when you go abroad.

The Gambia. Big on sunshine, but a let down when it comes to WiFi. It seems in this day and age we have become so reliant upon having instant access to information that we are lost without it, even when we have sand, sun and sea around us.

We take it for granted that we have the world at our fingertips so imagine how surprised we were when we tried to log on and had intermittent connection at best. It was a little better in the reception area but that was pushing it and involvedncontorting into weird positions for a signal. I fared a little better than my partner who was waiting for a refund to go into his bank account, so not being able to check was driving him crazy, whilst I managed to relax a little more and soak in the social media.

One thing I did miss the internet for there was googling food.  Sometimes when I order something in a restaurant, particularly abroad,  I want to look and see what the ingredients are, not necessarily at the table (although that has been known on a couple of occasions) The cuisine of Gambia typically includes peanuts, rice, fish, meat, onions, tomatoes, oysters from the River Gambia, cassava and chilli peppers, but one item that seemed to crop up on the menu a lot was Lady Fish. Not something I was common with, but we assumed it must be a local fish and so presumably fresh.  Everybody must now be aware of the potential health benefits of eating fish, often billed as a ‘super food’ it is packed with vitamins and minerals and a major source of omega-3 fatty acids, it is also said to help protect against a range of diseases, from cancer to heart disease and depression to arthritis, so we didn’t think twice about ordering.

On the last day of the holiday my partner had the misfortune to come down with a dodgy stomach.  I’d been the more adventurous with the food we’d tried so we couldn’t work out why, or pin point what had caused his ‘upset’, ironically on the last day the Internet connection seemed a little better so if I waved my iPad around, there was a certain spot in the room close to the death bed of my other half where it would connect. It was here that I eventually managed to google Lady Fish and to my surprise many sites were saying it was a dreadful fish, almost inedible. One site actually gave a recipe which advised to “cook with veg, then throw away and eat the veg”.  That seemed a little harsh but it made me wonder what we’d actually been eating.

The information I found stated that it is a bony fish, therefore not marketed widely for consumption, being mainly caught and used as bait, or ground down for fish meal. Don’t get me wrong. We can’t prove it was the Lady Fish. I’d been ill in Gambia on a previous visit after buying a milk shake from a beach vendor, or a bumster as they’re known, locals who will try to befriend you to raise money for their family. Often the only way to avoid them is to physically walk in the sea (because they don’t want to get their trainers wet) or stay at a hotel where security keeps them at bay, such as The Sheritan. 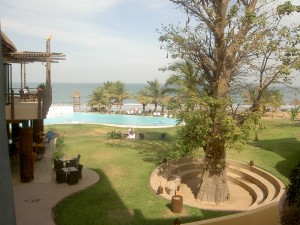 Gambia is small poor country and begging can be a real problem for tourists. The economy is dominated by farming, fishing and tourism with a third of the population living below the international poverty line.

I  guess we’ll never know what it was that made him ill, but it certainly put him off fish for a while. I tried to tempt him back with a visit to LochFyne in Nottingham, which to my surprise he agreed to, only to cancel at the last minute saying he didn’t fancy it.  Finally, about six weeks later he ordered a fish dish from the menu at The Jews House Restaurant in Lincoln, which thankfully he commented was “one of the best main courses he’d ever had” and so a few days after that he was keen to go back to our local fish vendor to pick up some fresh cod for me to cook for his supper.

I didn’t want to attempt anything too elaborate (or Gambian). The cod at the Jews House had been part of a bigger dish with ham hock and smoked sausage but the cod itself seemed to have been simply prepared allowing the soft white flesh to fall apart when cut, and with no spices, you could tell it was a really fresh piece of fish.  I decided to follow John Torode’s method of cooking cod from his book ‘Relax its only food’ in which he prepares it as good old fashioned comfort food along with a heaped serving of Champ, the Irish version of mashed potato.

I’ve adapted the recipe for you here:

Method
Begin by making the champ. Peel your Potatoes and cut into chunks, placing them in a pan of boiling water seasoned with salt. Whilst they are boiling chop the spring onions.
When the potatoes are almost boiled, in a separate pan place the milk, butter and cream and bring to the boil. Add the chopped spring onions and season then turn the heat down and simmer for a few minutes.
Drain the potatoes and mash then mix in the cream and onion mixture and keep warm.

Place a large saucepan (but one which can be transferred to a oven) on the hob the warm but do not add any oil. Preheat the oven to gas to 200C. Place your cod on plate with the skin side down on some paper towel to keep it completely dry. Oil and season the top then place the cod skin side down in the pan, leave it alone, do not touch it or try and move it and like a pancake it should start to brown around the edges. Pop the pan in the oven for about 8 minutes, then take it out and leave it on top of the warm hob for a minute. It will lift itself from the bottom of the pan so you can remove it easily and you should have lovely crisp skin on the bottom.  Place on your plate and drizzle with olive oil and a twist of freshly ground black pepper.
Scoop your champ next to it, adding an extra knob of butter on top of the champ for extra richness.

Simple but tasty comfort food.  So tell me readers, have you ever had any holiday problems and what’s your favourite comfort food?

Words and photos by Tanya Raybould