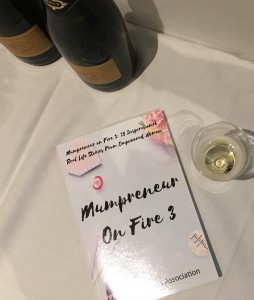 Two Leicester mums, sisters,  Estelle and Leona  started the business only 18 months ago and now have an online international following of nearly 30K women and have just released their 3RD book.
The fizz flowed and contributors and those there to support the launch were treated to canapés, and special guest entertainment from a talented young vocalist named Erin. Hard to believe she is only 16 years old! 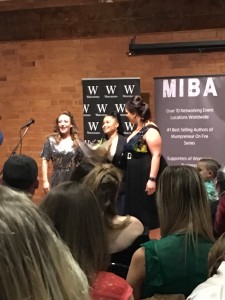 Now I’m neither a Mum nor an entrepreneur, but the book Mumpreneur On Fire 3 is a collection of awe inspiring, gritty, often emotional stories from just some of the mums in business that belong to this amazing, now international, group. It puts the spotlight on 25 of their members and allows them to become the authors of this book by giving them a platform, writing down their own journeys with some very powerful stories, so still well worth a read.

Leona and Estelle, started the business as they wanted to provide a place for enterprising women that were also mothers, to make friends, get business support, network and yet also be able to bring along their children without judgement.

A strong, young company that was born in the summer of 2017. The Mums In Business Association or ‘MIBA’ for short as it is affectionally known by its members, is approaching 30K women in its online Facebook tribe. After only twelve months it has over 60 operational child friendly networking groups worldwide, including Barbados, America, Spain and Australia.The organisation continues to grow at a substantial rate on a daily basis.

Already featured on the BBC, Biz Mum TV and across mainstream magazines such as Mum Boss UK, Best and Thrive Global Magazine, their popularity and media interest continues. 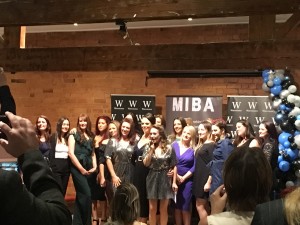 2017 saw MIBA hit #1 in Amazons’ best sellers list with both of their books Mumpreneur On Fire 1 & 2 and this hotly awaited third book keeps the two sister founders Estelle and Leona firmly at the forefront of business mum empowerment across the world creating a group of powerful supportive women. 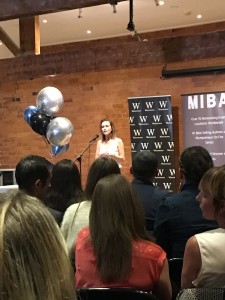 Holly Mathews spoke at the event in support of the book. Now a business woman, she grew up in a working class family in the North. She began working at 11 years old when she gained a role on children’s TV series Byker Grove after writing the producers a letter. She left the show seven years later to pursue a singing career, signing to Sony UK, releasing a single which ultimately was unsuccessful.  She attended the British drama school East 15 in 2005 but left after winning a role in BBC drama Waterloo Road.  She has also acted in Doctors, Casualty and the Bill.  As an actress she felt she was doing what she wanted to do and working for herself.  Outside of acting she took random jobs to pay the bills and avoid being permanently employed by someone else.

She became a Mum at 26 and now has two children, reassessing everything she was doing, she and her husband decided to work smarter rather than harder taking a financial hit but being happy.

In 2014 her husband was diagnosed with a brain tumour. Spending her days with him at the hospital she gained clarity through the tears and decided to do whatever it took, so she went to work alongside surgery, chemotherapy and radio therapy and built herself a business as a personal business and mindset coach to female entrepreneurs and creatives, launching her flagship online, self-development course The Bossing it Academy. Vlogging and working at his bedside until his death it gained huge media interest resulting in another platform for her to gain interest with her business.

Having contributed to a previous book in the series, her motto is to keep going and keep learning.