Restoration works to the historic murals in the dome of the Exchange Arcade to the rear of Nottingham Council House have reached completion.

Contractor G F Tomlinson and Nottingham City Council have been working with specialist restorer Alex Carrington to bring these murals back to their former glory after years of deterioration, largely due to water damage.

Originally painted in 1928 by Nottingham artist Noel Denholm Davies, the murals feature the Danes capturing Nottingham in 868, William the Conqueror ordering the building of the castle in 1068, King Charles I raising his standard at the start of the Civil War in 1642 and Robin Hood and his Merry Men.

The methodical process of restoring the paintings, which began in mid-March at the grade II listed building, involved significant periods of testing and cleaning to understand the extent of the damage and the nature of different varnishes and paints used before repainting could begin. This was necessary in order to ensure the murals would not be further damaged. 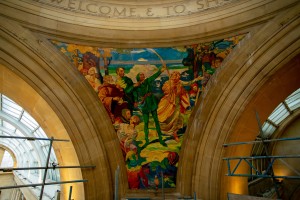 The Robin Hood painting was one of the most significantly damaged murals, but the restoration works have brought the tired painting of Nottingham’s most famous outlaw back to life.

Andy Sewards, managing director at G F Tomlinson, said: “We’ve established a great relationship with Nottingham City Council over the years and the restoration of the murals is the latest in a string of projects that G F Tomlinson has worked on for the Council House.

“The Exchange Arcade and Council House make up one of Nottingham’s architectural gems and the murals are an exceptional example of early 20th century civic architecture.

“We have a wealth of experience working on heritage projects and we have drawn on this to make sure the murals were sensitively restored.

“It was an honour to be involved in such an important project to the city and we hope this further cements our position as a leader in delivering high-quality heritage works within the region.”

Councillor Jon Collins, leader of Nottingham City Council, said: “These murals are a part of Nottingham’s history and we have worked hard to protect them. They have undergone a complete restoration and our experienced restorer has achieved some impressive results. I would encourage everyone to look up when they enter The Exchange and see the final results for themselves.”

The works were undertaken through the empa framework, which has since been superseded by Scape’s Regional Construction framework.

Mark Robinson, Scape Group Chief Executive, said: “We’re proud to have helped restore one of Nottingham’s most recognisable landmarks through our framework, driven by the specialist knowledge and local expertise of our delivery partners and a highly talented supply chain. Delivering this project supports an improved visitor experience, conserving an important piece of cultural heritage at the heart of the city.”

From offices in Derby and Lincoln, The Tomlinson Group works across the Midlands and nationally dealing with a multitude of different types and sizes of projects up to major multi-million-pound developments. 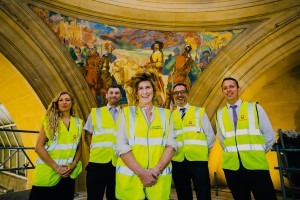 The company was formed in 1892 by George F Tomlinson.  From its early beginnings the Tomlinson Group has grown into a leading, well-respected construction firm with an enviable reputation.

By bringing together the strongest teams from the public and private sectors, Scape’s rapidly deployed, highly measurable and collaborative approach delivers value for money and quality buildings whilst stimulating local economic growth community enrichment. Scape operates with a current buying capacity of around £13bn and has helped to deliver over 2,400 public sector projects with more than 1,700 currently in progress. This year, Scape Group was named the ‘Best Client to Work With’ across the public and private sector, at the annual Construction Enquirer Awards.