After an incredible month of wrestling who’d have thought that August could have exceeded the standard that had been set in July, but for the promotion that based here in the city, House of Pain Wrestling, they’ve been busier than ever with a series of sold out venues and stacked cards at every single one.
Coming 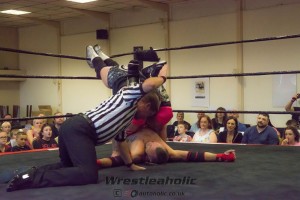 With the exciting news that Hope Wrestling has signed a TV deal with FITE TV, an online digital network who steam both free and PPV events, they will be at the Forest Town Arena in Mansfield for Evolution 50 which will be taped. House of Pain has their usual action packed month of action, including a Debut Day for the future stars of HOP on 2nd September at the St Anns venue check out the full listing at www.facebook.com/HOPWrestling. 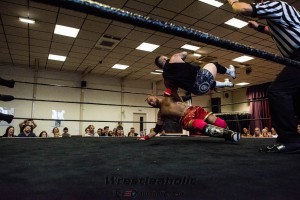 Friday 18th August saw the return by House of Pain Wrestling to the one of their regular haunts, the Working Men’s Club on George Street in Hucknall. The night got underway with Stixx doing a superb job filling in as ring announcer for the injured Zack. 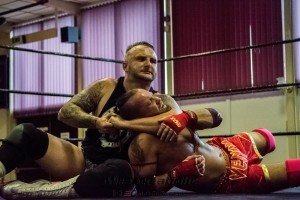 The card was chock full of great matches and began with the leader of the Malen Militia, Paul “Malicious” Malen facing off against HOP’s resident police officer “The Interceptor” Sergeant Mike Rothrock. Malen, who came to the ring to a chorus of chants of “Melon” from the very vocal crowd, started the match with a series of arm locks with both competitors being seemingly quite equal in their skill and agility. Rothrock then got the upper hand with a set of hip tosses that saw Malen flying all over the ring. The match soon got back to grappling action with Malen ending up painfully straddling the top rope but managed to turn the tide on Rothrock and gain the win via pinfall but needing his feet on the top rope for extra leverage which the referee missed. Surely this injustice can’t go unpunished and hopefully there will be a rematch the next time both men are at this arena. 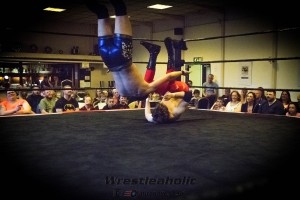 Next up was a tag team match with pitted Joseph Starr and Big Freakin’ Dan, BFD, against the team of Steve Harris and a masked wrestler making his debut at this venue, The Imperial Dragon. On seeing Harris make his entrance the crowd took little time greeting him with the usual chants of “Stinky Stephen” which of course got Harris all riled up. The match was fast pasted with both teams making a lot of quick tags, eventually Starr got singled out for a myriad of punishing moves from Dragon and Harris while they cut the ring in half and kept Starr away from his partner. He eventually got to tag BFD who laid waste to the opposing team and with a hot tag allowed Starr to deliver a flying elbow which sealed Harris’ fate and gave the win to Starr and BFD. 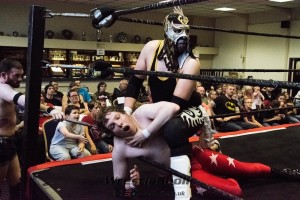 Big Mike Wyle and Timberwolfe had been best friends but after Timberwolfe turned on his former friend and joined the Malen Militia this match was on the cards, it was always going to be a case of when not if. Timberwolfe was reluctant to enter the squared circle and it took Big Mike to get after him out of the ring to ensure that he did so the match could start. It didn’t take long for Timberwolfe to be trapped and on the receiving end of some demolishing knife edge chops that were sure to leave their marks. 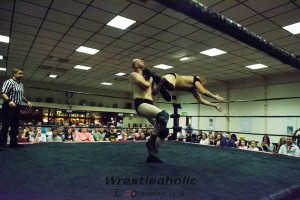 Timberwolfe finally resorted to dirty tactics and introduced a foreign object into the ring, part of a turnbuckle, but Big Mike was having none of that and relieved the canine one of it and was about to serve him his just desserts when the Malen Militia ran in, interfered in the match saving their colleague but gifting the match to Big Mike with a DQ. The Militia then set upon Big Mike which prompted Joseph Starr and BFD to return to the ring to help Mike and even the sides. 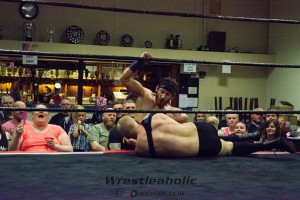 Stixx then announced that when the promotion returns to the venue on Sunday 17th September Big Mike would get his hands on Timberwolfe once more but this time it would be a Last Man Standing Match and so that there would be no interference, Davey Thompson and Paul Malen of the Militia along with Starr and BFD will all be handcuffed to ringposts. 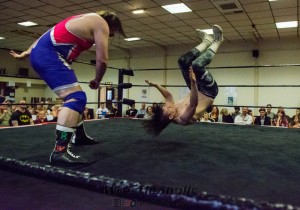 Match four was a tag team match that had been ordered by HOP after Nasty Nate Cole interfered in the match between The Supermodel of the World, Visage and H-Block last month. Visage would be teaming with “Nice Guy” Eddie Martin who gained his place by making the save at that event. 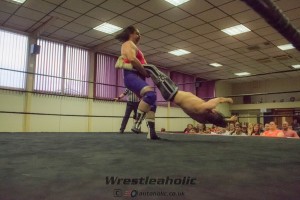 H-Block and Cole, now calling themselves BMX, which they tell us stands for Bad Men Xtreme, were not impressed when Visage pointed out to them that extreme is spelt with and E! The match got started with H-Block on the receiving end of chants of “Toilet Block” and “Scrappy Doo” from the audience, this did nothing to improve his mood and so he ensured that the match spilled out onto the floor so that he and Cole could attack Visage and Martin. 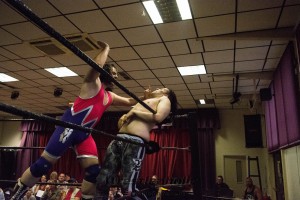 When the action returned to the ring it was Martin that suffered the brunt of the abuse BMX were intent on handing out. When Visage was eventually tagged in H-Block and Cole were treated to a series of shattering kicks from The Supermodel of the World which led to Cole trying to use H-Block’s House of Pain Full Throttle Championship Belt as a weapon. Martin swiftly cut Cole off and while he put him down with a piledriver, Visage had H-Block tied up on the floor in an awesome submission hold that saw the Full Throttle Champ tap out. Does this mean Visage now gets a title shot? Only time will tell but for sure that win won’t have escaped the attention of the powers that be in House of Pain wrestling. 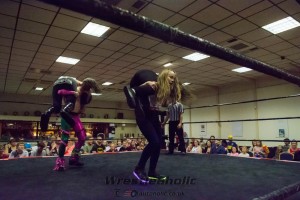 The next match featured Malen Militia member “Wildman” Davey Thompson who was accompanied to the ring by Jessica Logan against Disco Dan who had with him, Logan’s sister Charlie. The ref had been advised to make sure that the duelling siblings were kept apart while the action in the ring got going. 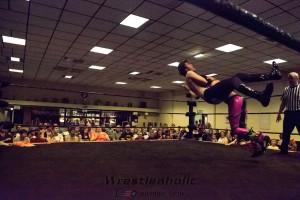 After some shenanigans which included Disco Dan making Thompson take part in some dance moves against his will, the battle was soon in full flow. The crowd were solidly behind Disco and when he and Charlie completed synchronised aeroplane spins on their opponents they went wild. Unfortunately for Disco after those great moves, Thompson managed to perfectly execute a devastating DDT from literally out of nowhere to take the win. 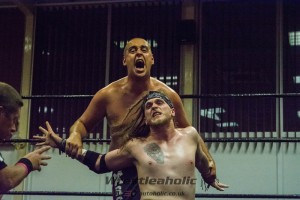 The Main Event of the evening was a tag team match and had the House of Pain Tag Team Championships on the line. The challengers were the team of Martial Law, “Mean” Marcus Hood and Bam Bam Barton against the current champs, “Livewire” Tommy Taylor and Lucas Archer. 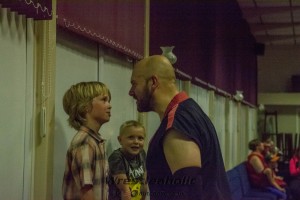 Hood was greeted by the raucous crowd with the customary chats of “Jelly Belly” had to be convinced to expose his “muscles”. His partner Bam Bam on the other hand had taking exception to something that someone had said and went eye to eye with the miscreant, no matter that it was a little kid and standing on a chair! Both teams were evenly matched and exchanged a series of fast paced holds, but it was Archer and Taylor who seemed to be in control with a host of high flying moves. 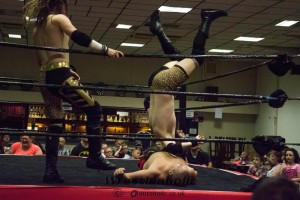 Unfortunately Hood and Barton use their size and power to their advantage and executed some demolishing double team moves. After a succession of near falls, Hood and Barton decided to resort to underhand methods to try to gain a victory but when Hood threw his hallmark nunchucks to his partner, Barton fumbled the catch and then Archer utilised this to turn the tables on his opponent and laid him out with the illegal weapon. 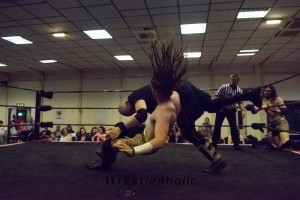 The referee caught this infraction of the rules and promptly disqualified Archer handing the win to Martial Law, it wasn’t all good news for the victors though as under House of Pain Wrestling rules titles cannot be lost after a disqualification. 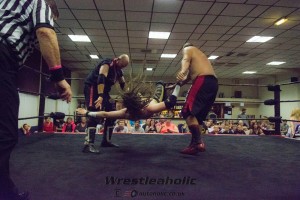