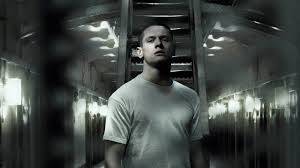 From just seeing the trailer or reading a synopsis for Starred Up you could be mistaken for thinking that this just another British prison drama, which initially could make you think of the hundreds of dramas seen on both tv and the big screen. However this is different, this is edgy, it makes you uncomfortable.

Jack O’Connell (localish talent and star of This is England) plays the outstandingly believable character of Eric, a young offender, who has been “starred up” to big peoples prison where his dad happens to be. Although Jack and the rest of the cast are quite accomplished in their previous achievements there are no “big” household names which make their characters even more believable as no one is particularly recognisable. Having said that it might be the career defining performance for the Aussie actor Ben Mendelsohn who plays Eric’s dad.

From the moment it starts you are sucked into prison life, you feel as though you are there. The distinct lack of a soundtrack and the 3rd person camera angles that David Mackenzie cleverly directed make you involved, you feel like you might actually get hit and before you know you are flinching in your seat. Forget 3D with direction like this you don’t need it. Even though it is mainly based on the real life experiences of 6 prisoners and a prison therapist, the script itself is clearly improvised during some of the more intense scenes. The pace of some of the insult flinging is too quick to capture it all but you will hear some of the most original insults known to man, you don’t know whether to laugh or be disgusted. (I obviously laughed).

Watch this if you like to watch naked men fight, to squirm in your seat and to leave the cinema feeling a bit battered and bruised. Currently available on Sky and to buy.