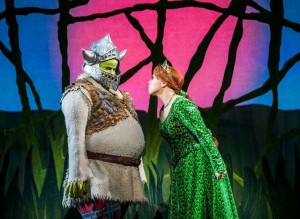 Shrek the Musical is simply fantastic, it is funny, clever, entertaining and simply fantastic. Just thinking about it makes me smile. It could possibly be the best production I have ever seen from the incredible sets to the hilarious songs this show does not disappoint.

From the moment we stepped up the Theatre Royal steps last night the enchantment began, with some of the fairy-tale characters in full costume meeting us on the steps! The audience, who were a wonderful array of ages, were ready in their seats early, and they were not disappointed. The show began with an huge book that was ingeniously brought to life and just got better and better from that point on.

For any Shrek lovers out there you will be pleased to know that if anything this is better than the film! This DreamWorks production is brought to the stage by David Lindsay-Abaire and Jeanine Tesori who have done the lyrics and the music. However for me its hats off to Tim Hatley for the sensational set and costume design. 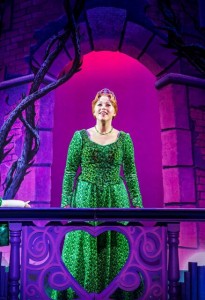 The cast were amazing. Amelia Lily, who played Princess Fiona, was born for the stage, forget X Factor this is where she belongs. Samuel Holmes as Lord Farquaad had his work cut out for him thanks to a clever costume but delivered in everyway. Shrek was brought to life by Steffan Harri, whose epically disgusting ways always brought a laugh. For me however it was Marcus Ayton as Donkey that stole the show, considering Donkey is my favourite character it was either going to be love or hate and it was most definitely love. 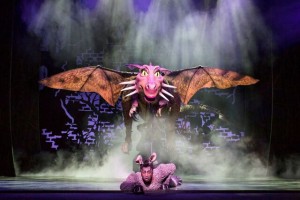 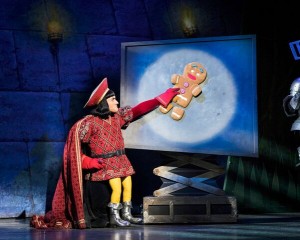 If I could I would go see this over and over again, don’t miss it whilst its in town at the Theatre Royal, showing for the next two weeks until 23rd September, for more information and tickets click here.