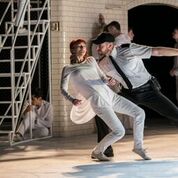 Last night I could barely contain my excitement as Matthew Bournes production of Romeo and Juliet was about to start. We were thrown in darkness as ominous and almost disturbing music filled the theatre and filled me with excited fear! Then the curtain dropped and we saw the set for the first time, The Verona Institute.

The same static set was used throughout but the changes of scene were cleverly depicted through the use of a variety of lights including a particularly worrying massive circle of lights that rose and dropped throughout the show.

Romeo had a fantastic entrance, but it was slightly confusing as to who Juliet was at first; as the extremely graceful ballerina, Didi Braithwaite, seemed mismatched to the youthful Paris Fitzpatrick’s Romeo.

The choreography included lighting and prop changes to add to the progression of the story. The dancers were beautifully talented as to be expected from a Bourne production. It should be noted that this ballet included local Nottingham talent and you couldn’t pick them out from the rest of the incredible cast. 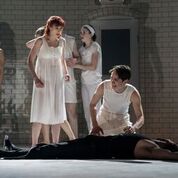 Special mention should go to the shamefully fanciable Dan Wright’s Tybalt. The use of shadows made his dominant character (muscles) particular impressive. However his “death” was far realistic for my liking.

For fans of the apprentice that attended last night it was a comical coincidence that the return of the show occurred on the same evening as Prokofiev score is used throughout.

This contemporary reimagining was frantic, dramatic and sexually charged. The gang mentality came across dramatically and was really akin to West Side Story.

As with any Bourne it was difficult to know where to look on the stage as so much was happening however, apart from Tybalt, it was the Mercurito storyline that really caught the eye.

Go see this if you like shadows, interesting interpretations and awkward kissing.

Unsurprisingly, however, this weeks shows at Nottingham, Theatre Royal is sold out. For more information on upcoming shows see www.trch.co.uk 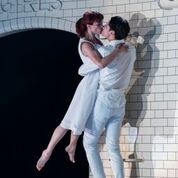