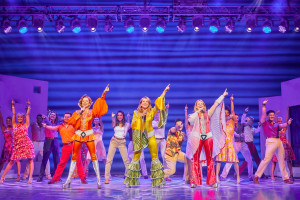 Mamma Mia has been running in London for 23years, now, and it’s easy to see why. This is a show that far surpassed any expectations I had, and possibly the best musical I’ve ever been to see.

For those that haven’t seen this, or the film, before it tells the story of Sophie (Jena Pandya) who is due to get married to Sky (Toby Miles) and desperately wants her father to give her away; however, she doesn’t know who her father is. She’s found her Mother’s, Donna (Sara Poyzer) diary and has discovered it could be one of three men that she dot dot dotted 20years ago. Harry ‘Head Banger’ Bright (Daniel Crowder), Bill Austin (Phil Corbitt), or Sam Carmichael (Martin Dickinson). Each are invited to the wedding by Sophie on the pretence that Donna sent the invitations…much to Donna’s initial horror.

Each potential paternal parent has there reminiscing moments with Donna, and epiphanies that they could be (and at times believe they are) the father of the, soon to be, bride. Infact, the chemistry on stage between the performers was some of the best I’ve ever seen and truly had me invested in what was happening on stage, A real Mother/Daughter connection was felt, the friendship between Donna and her fellow Dynamos – Tanya (Helen Anker) and Rosie (Nicky Swift), and how that friendship seemed to have passed through a generation to Sophie and her two best friends Ali (Jasmine Shen) and Lisa (Mariella Mazzilli). 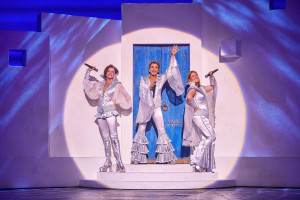 Now, obviously, we all know the songs are that of ABBA, but I was so amazed at how they worked into the story of this musical. Does Your Mother Know, was a lovely bit of fun to show off the fun, charm, and cheekiness of Sky’s best man Pepper (James Willoughby Moore), and such moves he had! To tell the truth, the whole cast absolutely SMASHED their songs and the vocals were incredible, but The Winner Takes it All, sung by Sara Poyzer gave me goosebumps, literally had a few tears in me eyes. Jena Pandya also knows how to hold a note, and it had me wondering how anybody could do that night after a night…I guess that’s why I’m not a singer. As I said before, though, they were all amazing.

The set was simple, some white walls for the streets of Greece with some windows and doors that could be pulled apart or span around to create space, or move the outside to the inside. The costumes (or lack thereof…I’m looking at you, Toby, in your pants) were great, too. Neon diving gear, including flippers, for the dream sequence down to 70s-esque disco costumes for the grand finale.

This really is a must see, feel good, show which has a 23year proven track record happy audiences to back it up. If you’re a fan of ABBA, or even if you aren’t, you wont help but be able to sing along. I’ll never be able to listen to another of their songs in the same way, and I can’t wait to see this show again.