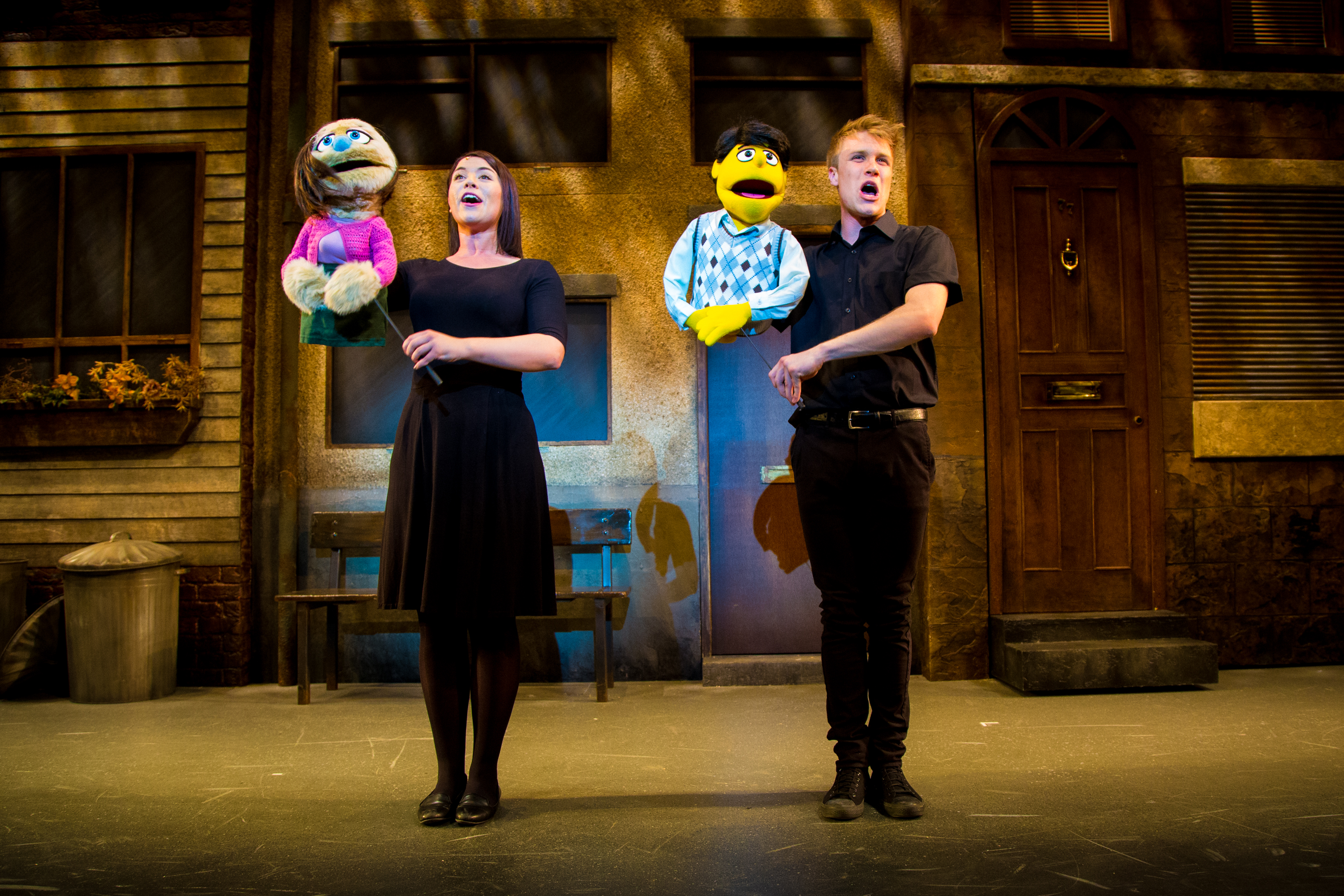 I grew up in a time when Sesame Street was a staple part of my television viewing. Muppet’s Christmas Carol was, and still is, one of my favourite Christmas films. There’s something very escapist about puppets. They’re alive…but not. They can, and do, say a lot of things we’re thinking but perhaps shouldn’t say. If you never have, watch Jeff Dunham.
Avenue Q is a play with Jim Henson at its very core, but not actually Jim Henson. The brains behind it, Robert Lopez and Jeff Marx, did take it to the late great Jim Henson’s wife and daughter to view to make sure they weren’t doing anything they shouldn’t, but they saw it as an homage to his legacy. They even got Paul Jomain as the puppet builder, who had previous experience working with the Jim Henson Studio (and came up with the PG Tips monkey no less!). This should give you an idea of the quality of show to expect.

I’d listened to some of the songs on Spotify (one in particular so many times that I could sing along), so got a gist of what to expect, and took my seat brimming with excitement, and already smiling, never expecting to be disappointed…and I wasn’t.

There is no solid plot, so to speak. Princeton (voiced and handled by Lawrence Smith) moves into Avenue Q, and is a bit down as he’s struggling to find his “Purpose” (Q some brilliant Sesame Street educational visuals), there he meets Kate Monster (Cecily Redman) and a host of other characters. Together they come to terms with accepting oneselves for who they are, love, homelessness, racism, forgiveness, and porn. It’s all done in a very humorous way, but the moral messages still come through clear. Each subject is done in a subplot way, which makes it more like lots of little skits sewn together (see what I did there?) into a seamless story.

The cast are just fabulous, and you know this because you forget half of them are there sometimes. I noted that I didn’t notice when the puppets would change handlers sometimes, and it took me a while to notice that some cast voiced more than one character. It’s because they’re good at what they do and you don’t see them, even though they’re in plain sight.

If and when you did watch the actors as they were puppetting (I like the word even if it isn’t one), you’d see that they were almost at one. Head movements mirroring their puppets, sighs, facial expressions you’d imagine the puppets to have. It was mesmerising. And it wasn’t just the handling puppetry skills. Smith, who definitely had his work cut out for him, was fascinating to watch and listen to when he sang. Saori Oda, who played Christmas Eve, has such a powerful voice and I was amazed each time she sang. Tom Steedon was brilliant as Trekky Monster, and Nicky, and one of the Bad Idea Bears (evil little buggers). Imagine playing three different characters with different cartoony character voices!

The rest of the cast were great, but I’m well aware that I’ve been going on for a while now. I presume you’re on the internet whilst reading this, and we all know what the internet is for.
Don’t take the kids to see this. Unless you want some awkward questions about puppet sex.