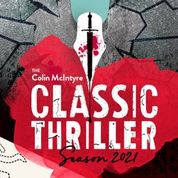 Last night saw the long awaited return of Colin Mcintyre classic thriller season to Nottingham’s Theatre Royal. Personally I was super excited to be returning to the theatre after almost 18 months, let alone to see the classic thriller All About Murder. However the theatre…it wasnt quite the same… it was most defintely more of an experience and a highly entertaining one at that…

In order to abide by the rona rules there were understandably many many different measures in place, which actually resulted in us having our temperature taken 3 times due to needing to loop around the one way system which involved exiting and reentering the building! Of course it was mostly our fault because we wanted a drink and also a wee before taking our seats. However it was all highly amusing and made for a wonderful farcical start to the evening.

When we eventually entered the stalls to find our seats, it was spookily empty, but only due to every other row needing to be unused and the seats between different groups, all for our own safety of course. 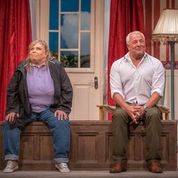 The play itself was just wonderfully entertaining, there was no interval, however the time just flew. From the moment the curtain went up I was fully engrossed. The concept of the play itself is simple, two writers (Nigel Forbes and Maxine Goodman, personified by David Callister and Susan Earnshaw respectively) trying to come up with their next play and stumble on the idea to kill someone’s annoying wife…because one of them has an annoying wife (played superbly by Susie Hawthorne). Hawthorne really captured me with her excellent portrayal of Anne Forbes, the alcoholic miser whom you can’t actually blame her husband for wanting to kill. 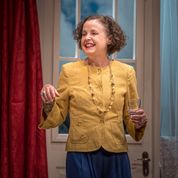 Apart from these 3 main characters, there is only the assistant and the detective; however the five bring this play to life on just the one static set. Expect to laugh and be surprised in equal measures. Although it did seem that myself and my companion were laughing a bit more than some of the other members of the socially distanced audience, perhaps the quick fire tongue-in-cheek dark humor was lost on some. 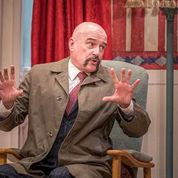 It was lovely to hear from the cast at the end of the show about how much they loved to be back, and you could really feel that from them throughout the performance. I cant wait to see even more shows and hopefully soon with more people!