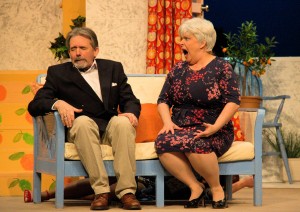 The Colin McIntyre Classic Thrillers Season returns to the Theatre Royal Nottingham this summer, with a different mystery explored each week.  Now in its 31st consecutive year at the city centre venue, the season opens on Tuesday 30 July and will run for four weeks until Saturday 24 August with a programme of murder mysteries, comedy thrillers and psychological drama.

“We’re all very excited about winging our way to Nottingham for the summer, especially on obtaining the rights for Frederick Knott’s Wait Until Dark, a classic underworld thriller set in 1960s London.

The next week, two Classic Thrillers Season stalwarts, Jeremy Lloyd Thomas and Andrew Ryan, don their best 1970s flares and platforms for one of Francis Durbridge’s best plays,Murder With Love. 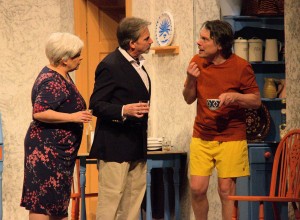 There will be laughs aplenty in our third week, with the murderous farce by Brian Clemens and Dennis Spooner, Anybody for Murder, last seen in the Classic Thrillers Season in 2010.

Finally, we will have Dangerous Obsession by N J Crisp, a tense psychological thriller that will be packing its bags to tour the country, following the end of the season in Nottingham.

The whole company are counting down the days and dusting off the poison bottles now, ready for another criminal theatrical spree at the lovely Theatre Royal.”

The four plays featured in the Colin McIntyre Classic Thrillers Season 2019 are:

Wait Until Dark by Frederick Knott

A sinister conman looking for a mysterious doll visits the apartment of Sam Hendrix and his blind wife, Susy. With Sam potentially implicated in a recent murder, Susy realises the doll could be the key to his innocence and refuses to reveal its location. A deadly game of cat and mouse then ensues between the two of them and Susy knows the only way to play fair is by her rules, so when darkness falls she turns off all the lights leaving both of them to manoeuvre in the dark until the deadly game is over. From the author of Dial M for Murder.

Murder With Love by Francis Durbridge

Many people dislike Larry Campbell but none more so than David Ryder does. Ryder pursues his wicked vendetta by obtaining a key to Campbell’s flat to kill him. Deceit, suspicion, blackmail and incrimination are woven into the web of crime culminating in a second killing and a tantalizing twist in the tail. This is Francis Durbridge at his very finest.

Anybody for Murder by Brian Clemens and Dennis Spooner

Max is planning to murder his wife Janet, collect her life insurance, and enjoy life with his girlfriend when friends Mary and George arrive on their Greek island with news they are beneficiaries of a huge fortune. Plots and plans are hatch, and soon everyone is hell bent on murder. All that stands in their way is the presence of a neighbour who knows a thing or two about murder, crime writer Edgar Chambers. This hilarious comedy thriller will have you on the edge of your seat and laughing out-loud in equal measures!

When John Barrett unexpectedly appears at the home of Sally & Mark Driscoll, it is clear he is looking for someone to take the blame for his wife’s fatal accident. Dangerously obsessed and determined to seek retribution, Barrett strips away the conflicting secrets of the Driscoll’s apparently perfect lives, until his twisted revenge climaxes in the devastating conclusion of this compulsive psycho-thriller.

Tue 13 – Sat 17 Aug: Anybody for Murder by Brian Clemens and Dennis Spooner