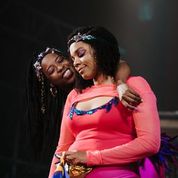 Following performances as part of SFP’s RE:EMERGE season at the Harold Pinter Theatre, Yasmin Joseph’s J’Ouvert will run for 5 performances only at Theatre Royal Nottingham from 21 to 24 July, enabling more audiences to access this exciting new production.

The RE:EMERGE season at the Harold Pinter Theatre is creating a space for new voices and fresh talent in the West End and beyond, working alongside some of the industry’s greatest theatre-makers and artists.Opening with Amy Berryman’s Walden – ‘A fresh and ambitious new play. A giant leap for the West End’ – Daily Telegraph – and continuing with J’Ouvert and Anna X, the season of plays curated by Sonia Friedman Productions with Ian Rickson tackle urgent issues integral to rebuilding our society, including structural inequality, climate change, and the economics of truth in an internet age. Supported using public funding from the National Lottery through Arts Council England, RE:EMERGE is supporting the theatre-makers of the future, providing vital work for the freelance community and celebrating the live experience as we begin to build back to the full reopening of British theatre.

The RE:EMERGE season, helping to re-open and re-energise our theatres, is staged in a Covid safe environment following current government advice and adhering to social distancing guidelines; and in line with Society of London Theatre’s See It Safely campaign.

A new play by Yasmin Joseph

“What people you know can party through all of the earth’s elements?”

2017. Carnival is here. The streets of Notting Hill are alive with history and amongst the pulsating soca, dazzling colour, and endless sequins and feathers, Jade and Nadine are fighting for space in a world they thought was theirs. A timely reflection on the Black British experience and sexual politics of Carnival, J’Ouvert is a piercing, hilarious and fearless story of two best friends, battling to preserve tradition in a society where women’s bodies are frequently under threat.

J’Ouvert was first produced by Bad Breed in co-production with Theatre503 and Tobi Kyeremateng.

Yasmin Joseph is a London-based writer. Her debut play J’Ouvert premièred at Theatre503 in 2019 and she was nominated for the Evening Standard’s Most Promising Playwright Award, and most recently won the 2020 James Tait Black Prize for Drama. She is the current writer-in-residence at Sister Pictures, and is on attachment at the Royal Court Theatre as a winner of the Channel 4 Playwrights scheme. She is also under co-commission with Soho Theatre and The Actors Touring Company as part of the Soho Six, The Place Theatre in Bedford with the Retired Caribbean Nurses Association and Clean Break.

Gabrielle Brooks plays Nadine. Her theatre credits include Anna Bella Eema (Arcola Theatre), A Midsummer Night’s Dream (Regent’s Park Open Air Theatre), Twelfth Night (Young Vic), The Way of the World (Donmar Warehouse), The Wizard of Oz (Sheffield Theatres), Everybody’s Talking About Jamie (Sheffield Crucible), Lazarus (King’s Cross Theatre), The Strangers Case (Liverpool Everyman Theatre), The Book of Mormon(Prince of Wales Theatre), I Can’t Sing (London Palladium) and Our House (Savoy Theatre). For television, her credits include Shadow and Bone and Coming Down the Mountain. For film, her credits include Notes on A Scandal. She has created and produced BlackStage UK – an emotional and educational exposé on what it means to be Black in the UK Arts industry, featuring 30 Black and Black mixed-raced workers from across the sector and from all over the UK.

Rebekah Murrell directs. She is an actor and director from London. She made her professional directing debut with J’Ouvert by Yasmin Joseph which premièred at Theatre503 in 2019. She is currently directing a community project for The Place Theatre in Bedford with the Retired Caribbean Nurses Association, and an audio drama for Audible with students at LAMDA; and will shortly be appearing at Shakespeare’s Globe in Romeo and Juliet.

J’Ouvert has been adapted for the screen as part of BBC Lights Up, an unprecedented season of plays for BBC radio and TV, produced in partnership with theatres across the UK and continuing BBC Arts’ Culture in Quarantine initiative. The film was screened on BBC Four on Monday 26 April and is currently available on iPlayer.

This is a socially distanced production.  For more details visit https://trch.co.uk/covid-19-measures/