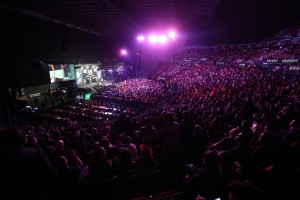 TO INCLUDE DUTCH DOUBLE-HEADER

ROTTERDAM AHOY is to host a Unibet Premier League double-header in 2019 as the ten-player tournament expands to include 17 nights next year,

The huge popularity of the Premier League has seen the roadshow event grow from being held in the UK & Ireland’s top arena venues to visit both the Netherlands and Germany in recent years.

The 2018 season also saw a sell-out double-header in Rotterdam to cater for the league night in Exeter being cancelled due to adverse weather.

As a result of that huge demand, next year will see Rotterdam stage league nights on March 27-28, including Judgement Night as the ten-player field is reduced to eight when the bottom two stars are eliminated.

The remaining seven league nights will each feature four matches over an increased format before the top four players proceed to the Unibet Premier League Play-Offs on Thursday May 23 at The O2 in London, where the destiny of the title will be discovered.

The league season will begin on Thursday February 7 in Newcastle, with English destinations also including Exeter, Leeds, Manchester, Sheffield, Liverpool, Birmingham and Nottingham.

Cardiff will welcome the Premier League back to Wales, while Glasgow and Aberdeen will again host nights in Scotland alongside visits across the Irish Sea to Belfast and Dublin.

Michael van Gerwen won a third successive Premier League title as he claimed glory in the 2018 Play-Offs, defeating World Champion Rob Cross in the semi-finals and Michael Smith in the final.

The top four players from the PDC Order of Merit, following the 2018/2019 World Championship, will qualify by right and be joined by six invited players to compete in the 2019 Unibet Premier League, shown live on Sky Sports and through the PDC’s worldwide broadcast partners.

“It’s fantastic that we can again announce an expansion for what is already the widest-reaching tournament in darts,” said PDC Chairman Barry Hearn.

“The Unibet Premier League has been a massive success with our growth across the UK, Ireland and now into Europe and the response we received from fans, our broadcast partners and players in both Rotterdam and Berlin in 2018 was tremendous.

“Whilst the double-header in Rotterdam in 2018 was introduced to replace the cancelled Exeter event, the incredible interest for two sold-out nights meant that it was a natural progression to compete twice in the Netherlands next year.

“That addition also means players only compete once per league night in the second half of the season, and over an increased best-of-14 leg format in each match.”

Tickets can be purchased online at
https://www.motorpointarenanottingham.com/online/premier-league-darts via 0843 373 3000 or in person at the Motorpoint Arena Box Office, Bolero Square, The Lace Market, Nottingham, NG1 1LA.

An exclusive venue pre-sale will take place from 10am on Thursday 4 October. Customers wishing to obtain priority tickets will need to sign up to the Motorpoint Arena Nottingham Mailing List by 4pm on Wednesday 3 October – https://www.motorpointarenanottingham.com/online/createAccount.asp The pre-sale email will then be sent to new Mailing List subscribers after 5pm on Wednesday 3 October. Current Mailing List subscribers will receive the pre-sale email today (28.09.18) and are asked to check their junk/spam folders if they cannot find the email.