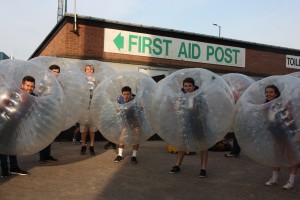 Students from Nottingham were seen running, rolling and bouncing around the pitch at Meadow Lane last night in a hilarious game of bubble football – all in the name of charity.

Adrenalin Jungle, Sherwood Forest’s largest outdoor activity centre, teamed up with University of Nottingham, Nottingham Trent and the Notts County FC Football in the Community initiative to offer spectators the chance to have a go at bubble football in a charity raffle, during the Nottingham Varsity football tournament.

Raising hundreds of pounds for Notts County FC Football in the Community initiative, ten lucky students took to the pitch at the County FC grounds after being picked in the prize draw.

With more than 2,500 cheering spectators, five students from each University battled it out in tough eight minute match, which saw Nottingham Trent University team victorious with a 3-0 win.

Robert Bayliss from the winning team said: “The whole thing was a great fun. A really enjoyable experience and even better because we won!”

Adrenalin Jungle owner Don Logan said: “We love bringing bubble football to events like this where everyone taking part and watching is having a laugh and up for a challenge. The guys taking part were fantastic and it’s so hard for us refereeing to keep a straight face when the players are falling over and bumping into each other!

“You really don’t need to be able to play football to play bubble football – it’s fun for everyone and we would encourage groups to book a session for this summer at our Sherwood Forest site.”

Notts County FC Football in the Community’s events & partnerships executive Neil Kelly said: “We are so grateful to Adrenalin Jungle for supporting our charity and providing the facilities free of charge.

“The spectators clearly enjoyed the tournament and the bubble football entertainment and we’ve raised lots of money which will go towards helping local people who are disadvantaged, find themselves socially excluded, or are suffering from illness. It’s been a great event.”

Nottingham Trent made it a hat-trick by going on to win the men’s match with a score of 3-1.

One of the organisers, Matt Nicholson, the vice president of sport at Nottingham Trent Student Union said: “It’s been a great varsity series this year. There has been a record number of sports and tickets sold.

“It’s absolutely brilliant that we have the opportunity to use venues like Meadow Lane and the National Ice Arena. We’ve had such great support from local Nottingham business like Adrenalin Jungle who have really helped us make this year’s varsity series as exciting and engaging as possible.”

For more information about Adrenalin Jungle and to book a bubble football session visit www.adrenalinjungle.com