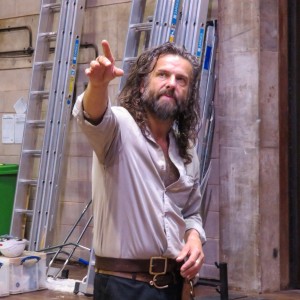 It is exactly 10.30 on Saturday morning and away from the hum of traffic outside and the hustle and bustle of the City Centre, our guide Ezekial Bone strides into the foyer of Nottingham’s prestigious Theatre Royal.

He is here to lead us on his “Magic Lantern” tour; a journey of exploration and discovery. A delve into the unseen and the unknown of one of Nottingham’s best known venues.

Ezekiel, aka historian Ade Andrews, is the worthy winner of multiple awards including Notts STARS ‘Guided Tour of the Year’ and ‘International Travel Trade’ Awards 18, and after over 25 years in the business, he certainly knows his stuff and is absolutely passionate about it.  Today he portrays the theatres resident ghost  ‘Everyman’, a manifestation of the human emotion imprinted within the fabric of the building.

“I’m the spirit of Everyman from the Common Man to the King,

and worked behind the scenes.

From the portico to the paint-frame, I have always been here,

I’ve seen it all because I am it all, in this temple of a thousand dreams!’ 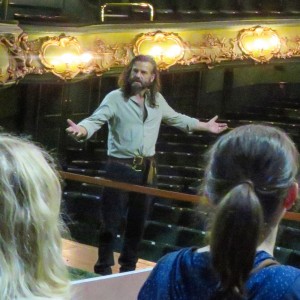 Ok, so Eziekal isn’t a scary ghost, just a fascinating one, which means the tour is completely child/family friendly. Our tour begins with a brief history of the beautiful Victorian Theatre, from it’s commission to completion.

Built over six months in 1865 by two Nottingham brothers, William and John Lambert, for 15,000 the new Theatre Royal’s elegant façade and opulent interior were widely admired. Thirty years later, in 1897, renowned architect Frank Matcham transformed the original auditorium, stage and backstage facilities, leaving the venue’s iconic columned portico you see now as the only remaining original feature. It is now considered one of the best surviving examples of Matcham’s work.
Ezekial leaves no stone unturned and impressively delivers his vast knowledge completely without script, chatting to the group as we move along, listening to their stories and memories of plays, pantomimes, musicals and concerts hosted at the venue, getting to know them and finding out facts he refers back to during the tour. It really brings the group together and gives an inclusive feel. 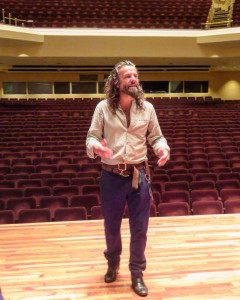 We continue into the auditorium where the stage is already set for the evenings performance, one of the many thousands to have played here which include Agatha Christie’s The Mousetrap which opened here in 1952 prior to the West End. She named it her ‘lucky theatre and she was right.  Little did anyone anticipate that the production would become the longest-running play in theatre history.
Ever fancied yourself on stage?  This tour is your chance as you get to stand in place of the actors and look out over the vast 1,186-seat auditorium and take in the elegant design and stunning green and gold decor, the result of a £5million refurbishment in 1978.
From here we head back stage where the inner workings of the Theatre are beautifully explained. The props and pulleys, the lighting and other special effects, along with stories of everything from how they are used to recreate battles at sea to the trap doors to the toilets and the first rows of chairs that can disappear underground to allow for an orchestra to play in front of the stage. We also see the loading area which allows huge lorries to pull in and offload sets, stages, instruments and props for visiting productions and artists.
We head down into the endless corridors below, the dressing room area and back up to the dress circle before moving on to a shorter tour of the 2,497-seat The Royal Concert Hall. It’s understandable shorter really as it was only built in 1982 however the superb visual and acoustic design of the building makes it one of the most unique and highly regarded music venues in the country. Nevertheless we’re are given a detailed history of how It was opened with a gala concert starring Elton John and how the set is cleverly changed to enhance the sound for individual acts using the acoustic curtains. A roll call of famous names from all over the word to have performed on its stage follows ranging from world-renowned classical soloists and conductors to a who’s who of the world’s biggest rock stars, pop bands and stand-up comedians as well being used as a cinema.
The tour is a must for history lovers, Theatre lovers, anybody with a general interest, or those wanting to get into theatre and production. At about 110mins the tour absolutely flies by.
For more details contact the Theatre Royal Box Office on 0115 989 5555.

For more tours of Nottingham with Ezekial in his other role as Robin Hood then check out his website http://www.ezekialbone.com