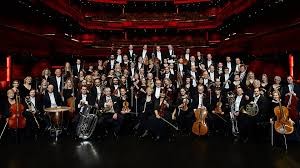 I write this as a bit of a live orchestra novice, definitely in the classical sense.
But music can be enjoyed on many levels. I basically enjoy the big sound of a full orchestra and can appreciate the pieces they are performing, whilst there are those, and there were many in the audience at the Royal Concert Hall, who will audibly comment or grunt even in acknowledgment of a particular piece, the arrangement or delivery.
The evening saw The Iceland Symphony Orchestra making its first visit to Nottingham under its Music Director, Yan Pascal Tortelier. Not his first visit it seems, beginning his career at fourteen as a violinist, he tells us that the last time he was here at the Concert Hall it was being built. He certainly is charismatic, not to mention energetic as he conducts the orchestra.  There are few other words from him, with the music instead left to do the talking, and that really is all you need.  So immersive is the sound that you are absorbed within it, your mind can’t really wonder from the wall of sound around you and if you are a fan of the classics then the music does indeed speak to the listener of humour, intent, indeed a whole array of emotions. As a novice you can’t help but be drawn into the atmosphere.
The first half is delivered with gusto and brings Gallic flair and finesse, with a selection from Bizet’s two sparkling suites from L’Arlésienne.  Regulars and classical music connoisseurs clearly know the right points when to applaud.  I’m more used to applauding after every number at a gig, here the end of some pieces is met by absolute silence.  It appears we don’t applaud until the end of the second suite, and when they start  – they don’t stop – the applause continues for a long time.
For a very short time I played the violin at School, failing to master much beyond a few notes and plucking the James Bond theme on the strings, so I have, albeit it a very basic and foolish idea of how difficult it is to play such an instrument.  This doesn’t even touch the complexity of what the musicians on stage deliver.  I can only imagine how technically challenging the pieces must be and goes far beyond my understanding.
Ravel’s Piano Concerto for the Left Hand, composed for one-armed pianist Paul Wittgenstein follows and is, in comparison to the first pieces, a moodier affair, its subterranean opening sounds emerging into a riot of colours that recalls the sunrise of Daphnis and Chloë. The influence of jazz is also felt with jaunty rhythms running throughout.
Jean-Efflam Bavouzet, an award-winning interpreter of Ravel, is our soloist, another charismatic genius.

Anna Thorvaldsdottir is Iceland’s leading living composer and her 2011 piece Aeriality evokes the freedom of gliding through air set against the motion of musical tectonic plates.  I hadn’t realised she was in the audience watching the piece being performed until she was called onto the stage to take a bow, even then I didn’t hear any introduction, it seems if you know – you know.
Aeriality sets the tone for the following piece – Sibelius’s First Symphony, whose etched melodies and rugged climaxes put a Finnish timbre on music blending Germanic rigour with Tchaikovskian expression.
This symphony’s direct energy and drama ensured its place amongst the greatest turn-of-the-century compositions.
More applause and as a finalè we’re treated to two more short pieces – although long enough for some to get up and leave presumably for their bus!  Even classical music etiquette doesn’t stop that it seems, which is a real shame when you are witnessing something so absorbing and in the moment that they must be clock watching.
Another noticeable difference in classical music etiquette is the absence of mobile phones.  We are told to switch them off upon entering the auditorium, which is understandable, the last thing they want is a ringing phone during a poignant moment, but you won’t see anyone trying to film as you do at a gig.  The mere flash of a screen (presumably to check for the bus) is met by tuts
Overall a charming evening of entertainment with beautiful arrangements and mesmerising performances, even if this novice does say so. A century ago, Iceland had never heard a symphony orchestra in concert. Now the country has a world-class one.
By Tanya Louise
Editor
Visit My Blog
Visit My YouTube Channel
Find Me On:
Twitter Instagram and Facebook